Too often we turn Jesus' parable of The Good Samaritan into a cheery, toothless story about the virtues of doing good. In so doing, we ignore its radical message.

It's always good to look at the context of a parable, as well as its content. It starts when a religious lawyer sets out to test Jesus. Quickly Jesus turns the table. But the lawyer is prepared. He offers an impeccably solid answer to the question of which law is the greatest: "You shall love the Lord your God with all your heart, mind, soul and strength. And you shall love your neighbor no less than yourself." But the lawyer couldn’t leave it at that.

Just who, then, is this neighbor I am required to love, Jesus? It’s as if he wants to know just how big he must draw the circle of compassion.

Common sense and our need to preserve righteous boundaries dictate that there has to be limits to this neighborly love. Let me know who I can write off, Jesus, so I can focus my care and concern on those who deserve it.

When I was younger it was easier to count people as sufficiently different from me as to skirt Jesus' command to love them no less than myself. I remember coming home from church in time to watch my beloved Washington football team, never once contemplating that their team name was a racial slur.

In 3rd Grade, when the teacher introduced a new Hmong student I laughed myself silly because his first and last names rhymed. I hope he doesn't remember my laughter as vividly as I do.

There's not a week that goes by when I don't recall with shame the punchline of some racist joke, usually directed at African-Americans, that I used to think was funny. When I was growing up, I readily accepted any number of stereotypes: Russians were to be feared. Polish people and blonde women were unintelligent. Though I have always been overweight myself, people heavier than me were lazy slobs. 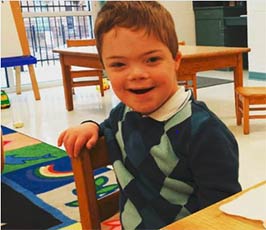 At an earlier age it was easier to refer to people who'd acted in unwise ways as "retarded."

Now that I have a son with Down syndrome, that appalls me. When someone acted in a bothersome way, I had no qualms calling them a "faggot." But that was before I went to seminary and worshiped with so many fine people who happened to be lesbian and gay. There are additional hurtful stereotypes today, but the same impulse behind them.

Syrian refugees are terrorists in disguise. Undocumented workers are criminals who want to drain off precious resources. Trans people are freaks and predators.  Never mind that any person from any of those groups has more to fear from me than I do from them. Surely they deserve my laughter and scorn, not my neighborly love. I am free to make them the butt of my locker room jokes and poke fun of them on my Facebook feed. Right, Jesus?

Whatever justifications for my unloving attitudes and behavior (which continue more than I'd like to admit) are no better than those of the priest and the Levite who saw a suffering man in the ditch and sped up rather than helping him. It helps, with this parable, to imagine ourselves in the ditch with the victim. That way, like him, we can imagine the terrible view of the trailing robes of those with which we always presumed we had so much in common. In fact, these weren’t just any passersby. They were our most religious, most virtuous neighbors. With the man in the ditch, our illusions about what constitutes a neighbor come crashing down.

Such a revelation can hurt more than the mugging did. Like so many of Jesus' parables, this one has a twist. Help comes through the least likely source. A religiously-unclean, ethnically-impure man from Samaria is the only one to show compassion. His help was the sort that you'd crawl away from if you could only muster the strength.

Imagine an undocumented immigrant tending Donald Trump's wounds or the CEO of Goldman Sachs loading Bernie Sanders up on his corporate donkey, and you sort of get the picture.

This Samaritan has nothing in common with the guy in the ditch other than his shared humanity and yet gave extravagantly of his time, energy and treasure so that a loathed enemy would be healed.

THIS is what a neighbor is, Jesus says. After eight years I am about to conclude my time on the WNCC Justice and Reconciliation Team, serving for the last two as chairperson. It has been a privilege to work with an ethnically diverse team of the sort of people that I have not always counted as neighbors or friends. I have been cheered by stories from across the conference who are reaching across so many different lines of culture and class to share the good news of what God has done in Jesus Christ.

Through the grant application process the team has learned about many innovative ministries to reach underserved people. God is still reminding me that I'm not as enlightened or loving as I need to be, or sometimes imagine myself to be. But my hope and prayer for you and me is that we'll all continue to grow in neighborly, empathetic love for all those around us. If we do continue to grow in our capacity to love, God’s name will become more broadly known and God’s Kingdom grown, until earth more fully resembles heaven.

Matthew S. Smith is the Associate Pastor at Guilford College UMC in Greensboro.