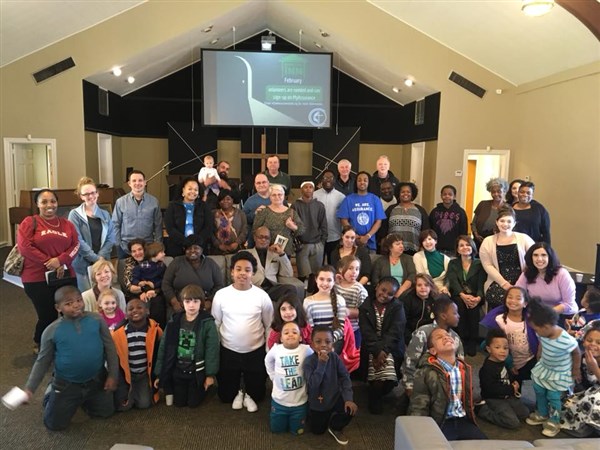 By Dave Zietlow and Jesse Enniss

Assurance UMC’s commitment to our core vision of growing and nurturing disciples has served as a catalyst for church growth and has propelled and energized our missional outreach ministries. The Assurance leadership, with much prayer, planning and intent launched Connections as a new church in 2011. Assurance leadership sensed that the congregation was eager to grow in service to others after successfully launching a contemporary worship service and observing overwhelming participation during out-reach service opportunities serving a neighborhood school, food ministries at the downtown shelter, and hosting Room in the Inn. Building on this, Lead Pastor Chris Westmoreland and the church lay leadership cast a church-wide vision that emphasizes mission. Local Pastor Danny Meyer led our Connections community the first five-plus years before leaving in January of 2017. Under the direction of our new Lead Pastors Lonnie & Susannah Pittman at AUMC and our Connections Community Minister Jesse Enniss we continue that work today.

Jesse Enniss began his journey at Assurance UMC as a young man in the youth program and within a year was placed in leadership positions such as leading group studies with other high school youth and counseling the middle school youth in the program. Upon graduating high school, he took a volunteer position in that same youth program where he led middle high Sunday school classes and chaperoned on mission trips and retreats. In 2014 he took the position as Youth Discipleship coordinator in the Connections Community. Since then he has held the title of Worship leader and until his Community minister role began.

It was in engaging in a personal relationship with the youth that made him committed to seeing the ministry in the Connections community grow. He believed that God was not just leading him to serve the youth but their entire families and in order to do that the Connections leadership committed to transforming the entire community.

We engaged in an intentional visioning process that focused the church on reaffirming our call as a community of believers. Strong participation from the lay leadership in this process resulted in a two-pronged focus—discipleship and mission—and our mission to Grow & Go as the Assurance faith community. This process led to significant work on what it means to be an action-oriented disciple in the Assurance community.

How have we lived out the GROW of our mission? We developed a discipleship process that focuses on Spirit, Share, and Service resulting in a deeper commitment to small group communities. A Path to Discipleship was implemented which focuses on meeting people where they are and supporting them in forming a deeper relationship with Jesus and the Assurance community. Our focus in 2012 – 2018 is to build, nurture and grow a multiple site missional community with discipleship and leadership development at its core.

Our mission has become Grow in Spirit, through weekly worship, daily prayer, and small groups, to Go out serving in the world and sharing the Good News of Jesus Christ’s love for us along using our gifts. We seek to practice relational discipleship where every individual is of value and healthy relationships are fostered with ALL people.

At Assurance, creating a Kingdom worship experience means creating a sacred space that reflects the breadth of diversity that is God’s tapestry. The challenge remains that both formal and informal segregation has been the norm through much of the United States since its inception. According to research conducted by sociologists Deyoung, Emerson, Yancey, and Kim. 92.5% of Catholic and Protestant churches in the United States can be classified as “monoracial” meaning 80 % or more of attendees reflect the same ethnicity and socio-economic stratum. Out of the remaining 20% which can be considered “diverse”, only 2.5 % represent the Protestant church. Old models of homogeneous church are becoming less and less reflective of the communities in which they are located, causing a gap between the very people they are called to serve. Assurance Connections Campus seeks to cross this divide by intentionally building an infrastructure that invites the diversity of God’s splendor. It is our intent to be a multi-ethnic, economically diverse, cross-generational community of faith that seeks to know God and make Him known through the pursuit of unity, in accordance with God’s plan for humanity in Christ Jesus as depicted in John 17:20-23. This authentic and organically cultivated community is patterned after the New Testament church at Antioch (Acts 11:19-26).