It seems we are a culture of short memories and short attention spans. As much as I pretend that I am above this cultural shift, I admit that post fatherhood and new church appointment responsibilities, I am as guilty of this as anybody else. Occasionally, I feel like the dogs on the movie “Up” when they see a squirrel. It doesn’t take much to distract me!

All the more reason for sermon series preaching.

Wait. What? How does that make sense?

It seems counterintuitive to preach a series of three, four, five, six, etc., weeks if people are mentally living day to day (not even week to week). Yet, in the context of my church appointments, I have found the exact opposite to be true. I believe that carefully crafted and intentional sermon series are actually the very thing that is needed in our chaotic and quickly distracted world.

I have found that a good sermon series can not only grab the initial attention of the curious member or visitor, but it can also keep them engaged. So many of the subjects and sections of the Scriptures that we preach as pastors are worthy of more than one week of focus. The series approach gives the preacher more time to hit all of the transformative ideas that he or she finds in the subjects and passages present in the Bible.

Series preaching can be topically or Scripturally based. Of course, ALL SERMONS should find their heart and soul in the Holy Scriptures. That is a given…or should be! However, many times in my series preaching, I find that the series is put together around an idea that is intriguing to certain groups of the population in and around my church. Yet, I have also found that there are times where a series can be a journey through a book or character of the Bible. Both types of series are beneficial in their own unique ways.

The best book I have ever read on this subject is Adam Hamilton’s “Unleashing The Word.” It is an older book, but many of the foundational ideas he gives in the book have stuck with me in the ten years since I have read it. You can find the book at Cokesbury here.

The core of what I got out of Hamilton’s book is that it is important to know the time of the year in which you are preaching. Meaning, certain series ideas may be better for certain times of the year because the key people attending may be different. For instance, churches typically have more visitors at the beginning of the calendar year. Therefore, it is important to have a series that would be attractive to non and nominally Christian persons in January. In the summer, the majority of those who consistently come will be committed members of the church, so it is best to preach more Scripturally thematic sermons. Although I do not follow all of his detailed advice on how to create a sermon series calendar, I do take the idea of special times of the year being associated with certain audiences rather seriously.

One of my favorite sermon series that I have ever preached in January was a marriage series titled “Mix-Tape.” I used the concept of creating a mix-tape from the 1980s and merged it with Biblical themes for a healthy and sustaining marriage. It attracted many visitors to the church, as well as people who were on the fringes of any level of commitment to Christ and the church. It was a very practical and applicable series idea in which the majority of those in our communities have an interest, whether they are Christians or not. Likewise, one of my favorite Summer series I have preached was a series directly from a book of the Bible. It was called “Life Before Death,” and the series went through the entire book of James. Many of the more committed members expressed appreciation for the more in-depth study of a portion of the Bible. The rules for series preaching have more to do with successfully reaching my target audience than my own personal preferences. It’s not about me. It’s about reaching people for Christ, and also discipling them in their faith.

Below is a personal process I try to follow in sermon series calendaring. It is similar to Adam Hamilton’s annual structure. I do not stress about following this with rigidity, as I always want to be open to the guidance of the Holy Spirit. Overall, however, I have found this format to be helpful when planning my series.

January/Early February: I preach what I would call “seeker friendly” series that are intriguing for those outside the typical church bounds. It is very important to advertise this series at Christmas Eve, as there are many visitors at that time.

February/Or Before Lent: A wide variety of sermons that depend on the time frame between the end of the first series of the year and Lent. I usually stick with a concept that I believe can be interesting for a member and a guest.

Lent and Easter Day: Although I do not personally follow the lectionary or the Church Calendar, I have found that it is beneficial to preach “deeper growth” sermon series that “fit” with the Lenten season. I often use the season of Lent and Easter Sunday as an opportunity to preach a series that gradually builds with the story of the life, cross, and resurrection of Jesus Christ.

Post Easter Sundays: The weeks after Easter are a transitional time that can be used for a variety of topics. As we all know, the actual week after Easter is usually one of the least attended Sundays of the year. Therefore, I have tried to do something that may appeal to both guests and members alike.

Late Spring: Similar to January, I preach a series in this time frame that is more attractional in nature. Many families are gearing up for the end of school and Summer, and I want to make sure I am able to connect with those on the edges one more time before they begin the Summer schedule.

Summer: During the heart of Summer (June and July), I usually try to do a series that is strongly based on either a book or character/theme of the Bible. Those who are more invested during the Summer seem to appreciate the fact that we as a church are going deeper into the Scriptures.

Late Summer/Early Autumn: In this time frame, I once again try to preach a sermon series that is more intriguing to those who are either on the fringes or have been “off and on” during the Summer months. In an attempt to encourage re-connection, I usually preach something that is very relational to their lives that will peak their interest. Believe it or not, I have also used this time to preach sermons that find their starting points with a story of the Bible. For instance, my first sermon series after Labor Day this year is titled “Vs.” It is about the story of David and Goliath and is directly preached from the Biblical story itself. Yet, the overall theme of the series uses the story as an inspiration to conquer our own giants. Therefore, the message covers both areas of focus. Non and nominally Christian people are very much interested in working through the things that hold them back or cause hesitancy in their lives.

Autumn: I often use the regular Autumn months to go a little deeper. Whatever I preached in the late Summer and early Autumn will usually influence what I preach in October and November. I have a lot of flexibility in this time frame.

Advent: Once again, although I do not preach the lectionary or typically follow the Christian calendar, I do approach Advent very much like I approach Lent. I use the few weeks of the season to focus on the story of Christmas.  There are so many different nuggets in the Biblical stories leading up to the birth of Christ that each year God provides the clarity for approach.

I have also found that having a way to help the listener connect to the sermon during the week is essential to helping the sermon resonate beyond Sunday. At Assurance, we have included “Reflection Questions” and “Digging Deeper” sections in the bulletin and on the website. These questions and other insights are crafted to be suitable for individual and/or small group study. We keep it simple, so as not to overwhelm with information. Yet, we also develop questions that encourage the congregant or visitor to truly contemplate the subject and Scripture passages of the week.

Below is an example from our most recent sermon. We are currently in a series titled “iDoubt.” The goal each week is to have three or four questions and one or two thoughts to go deeper into the topic/Biblical witness. 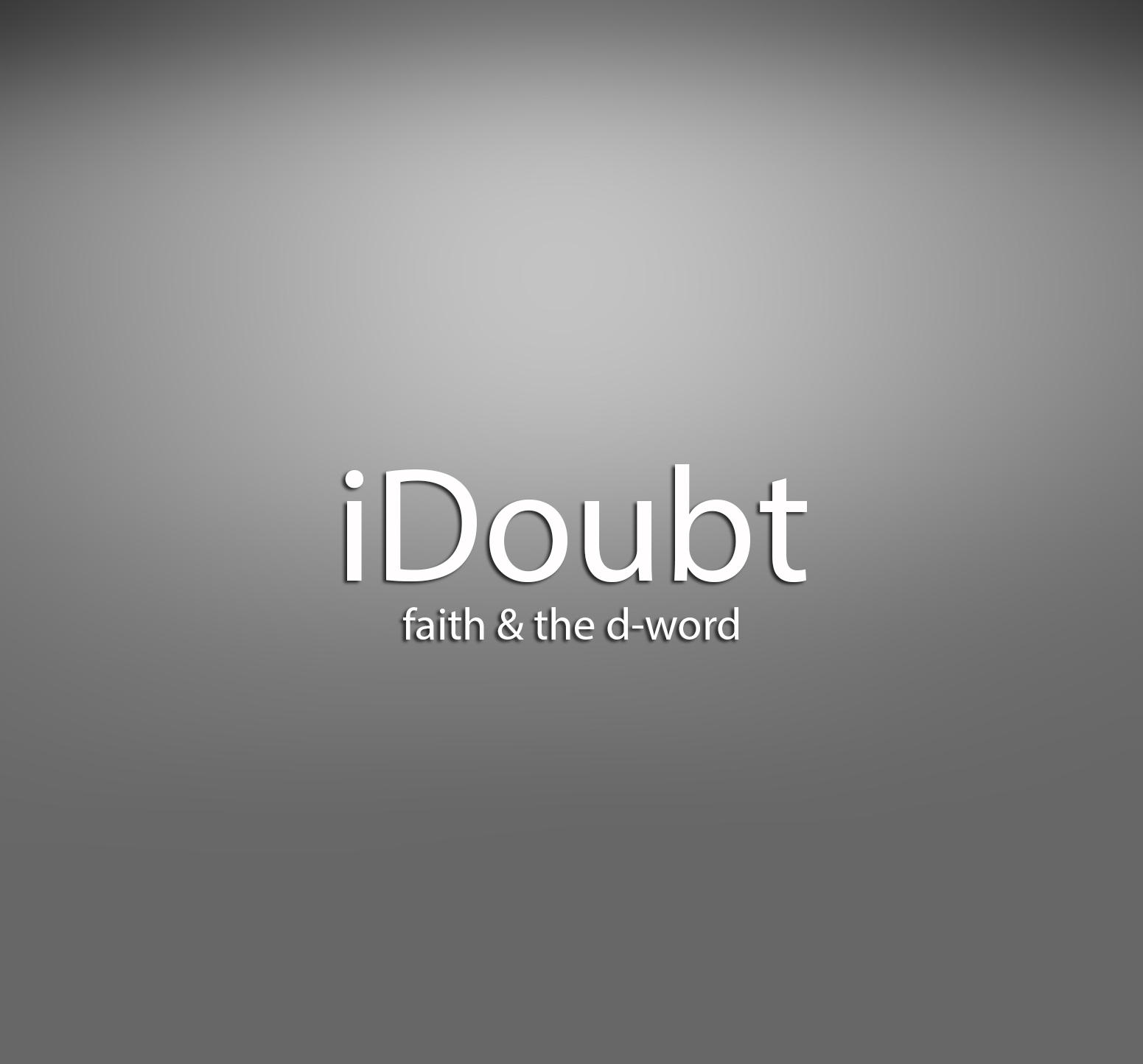 Read Matthew 14:22-32 and then watch this YouTube clip: https://www.youtube.com/watch?v=5KdFpW6WT6s. Reflect upon the passage of Scripture and the cinematic interpretation from the movie Son of God. Then think of the times where you were metaphorically “walking on water” and you allowed the distractions of life to sink you. Also, reflect upon the times that Jesus reached down and pulled you out of the water as you were sinking.

KNOWING YOU AND KNOWING WHO

Ultimately, in my experiences, so much of what I preach from series to series is based around the concept of “knowing you and knowing who.” By “knowing you,” I am concerned with knowing my skill set and particular calling in the pulpit. By “knowing who,” I am concerned with the congregation and wider community to which I am preaching. Personal and contextual knowledge is at the heart of good series preaching. I do not believe that a pastor should be tied to any particular style of series concept. Times change. People change. Yet the message of the Good News is timeless.

It’s never about changing the actual news. The ultimate news that we preach is priceless and does not need to be changed. The avenues of how we communicate that news do change. If you think I am wrong, then just try to preach one of John Wesley’s sermons and use his language. See how that works out. It won’t. We do not live in 18th century London. Yet the actual heart of the message that Wesley brought to the people has never changed. It is same yesterday, today, and forever!  Wesley once said he had to become “more vile.” While I think that word is a little harsh, I believe brother Wesley may have actually be onto something.