The Five Dysfunctions of a Team Book Review 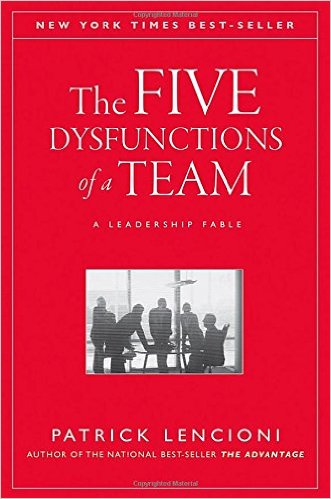 “If you could get all the people in an organization rowing in the same direction, you could dominate any industry, in any market, against any competition, at any time.” (page vii)

So what’s the problem? Why can’t we all just buy into the organization’s vision and get on with it and go to market together? We talk about the most important asset of any organization being its people, actually the right people. So how do we get the right people and get them behaving as a team? From the beginning, Lencioni reminds us that we humans are imperfect thus dysfunctional by nature.

Kathryn has a diverse group of players. A Myers-Briggs Type Indicator (MBTI) points this fact out well. Beyond the differences in personalities, there are major differences in behaviors. The financial director was tight with the cash. The head of technology was brilliant but distanced himself from the team especially in meetings. The marketing director was sharp but lacked key social graces. The head of business development, who was CEO and stepped down, micromanaged. The sales director didn’t keep promises. The customer support manager was a workaholic. Finally the chief operating officer lacked a clear understanding of his role within the organization. Looking at the lineup, it’s enough to wonder, why bother?

The story unfolds over a period of time with Kathryn knowing what she has to do and working to get the group shaped into a team. There are casualties along the way. The marketing director refuses to change her behavior and is asked to leave the business. Obviously, she was not the right person on this bus.

Kathryn takes a few pages out her basketball-coach-husband’s playbook and teaches the group the five major dysfunctions of a team. It becomes apparent that these five dysfunctions are alive and well at DecisionTech. Though tough and painful, the group learns the lessons and becomes a team.

The last third of The Five Dysfunctions of a Team looks at the model that Kathryn used to get the group turned into a team. 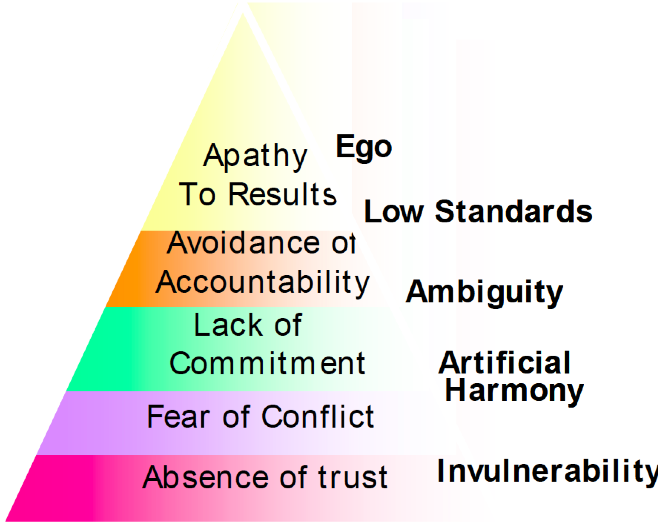 The model looks like a pyramid with trust being the foundation to a team’s success. The unwillingness of team members to share their vulnerability is at the heart of trust. Team members must be open about mistakes and weaknesses as well as their strengths.

The failure to create trust leads to the fear of conflict. People who avoid conflict create an artificial harmony. True problems never come before the team and never really get solved.

When there is a lack of healthy conflict, people are not committed. Why should they be? Absence of passion makes the heart grow cold. A cold heart leads to the fourth dysfunction, avoidance of accountability. As teams come together, they go through a natural pattern of forming – understanding the members, norming – understanding expectations, goals and agreements, storming – where members push back and don’t adhere to the agreed upon norms. Accountability becomes lacking and this behavior disrupts the team.

The only way the team will reach performing – team finds flow, is to get team members to hold each other accountable. This also means checking egos at the door so the team comes before the individual. Without this behavior, there is an inattention to results and apathy rules.

All five pieces must work together in order for the team members to row in the same direction, to become a great company and to lead in their industry.

Lencioni’s message is simple but well grounded. The model can be used outside of business, in not-for-profits, in churches, civic organizations and even in our homes.

find this book on amazon.com here.