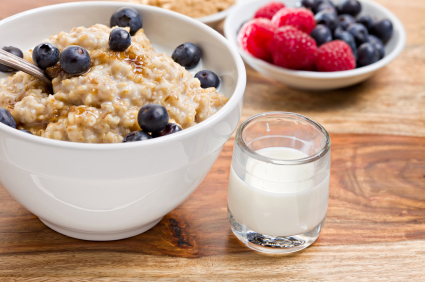 The longing for simple weight loss solutions is everywhere, from punishing diets to grueling exercise regimens. But, as we all know in our hearts, there is no silver bullet. Just as weight gain comes from the hundreds of daily choices, some big and some small, that make up your entire lifestyle, losing weight doesn’t happen all at once or with one big extreme effort. This is great news! It means that you don’t have to stress out over not going Paleo or spending four impossible hours at the gym every day. Yes, you must move regularly and vigorously and eat well, but you can also make truly simple tweaks to the rest of your life to support your physical health. (And your ability to manage stress will get stronger for it). Here are five weight loss tactics that don’t involve exercise or elaborate diet plans (and which make up one very important piece of the puzzle). 1. Set out a fruit bowl Cornell professor Brian Wansink, author of Mindless Eating, says that on average a person makes 200 decisions about food in a day. With that much pressure, you can’t expect yourself to be conscientious about every choice. Instead, you can change your environment so that the choices get easier. Wansink’s research is the proof in the pudding, so to speak. In one study, he found that “people who have fruit bowls on their kitchen counters weigh eight pounds less than those who don’t,” as Fast Company reported. If you’re honest, you know you’re going to want a snack around, say, 10 a.m., and you’re probably going to start grazing come three in the afternoon. With yummy fruit as the choice at hand, you’re more likely to eat well more often. 2. Make nicer friends A study on the power of positive feedback blew me away. In it, writes the Science of Us, “women who heard words of acceptance about their size tended to either maintain their weight or lose a little bit; on the other hand, women whose friends and family criticized them about their weight tended to gain more of it—four and a half pounds on average.” We’re social creatures; what other people think of us matters. If you spend time with friends, family, or colleagues who put you down about your size, the study suggests, you’ll take that negativity right into your body. Instead, seek out the people who accept you the way you are and say so. And beware the backhanded compliments that so often accompany comments about appearance. A meQuilibrium colleague still remembers the sting when an eighth grade classmate said to her, “You know, you’d be really pretty if you just lost a little weight.” Life lesson: These are not the friends you need. Read more on protecting yourself from the energy vampires in your life. 3. Get your sleep It’s boggling that something as vital to our health as sleep became so scarce for so many. In addition to reducing stress and promoting overall health, the length and quality of your sleep affects appetite signaling in the brain. A 2013 study found that sleep deprivation changes a region of the brain associated with addictive behavior, making subjects more likely to eat for pleasure, not hunger. On the flip side, adequate sleep has been shown to improve weight loss efforts. The bottom line is clear. Getting enough sleep makes it easier to get a handle on weight loss. I’ve written before about my top tips for better sleep, and you can check out our editor Terri Trespicio on a CBS Early Show appearance talking about the best and worst sleep positions. 4. Eat almonds and drink water Not exclusively, of course! But both almonds and water can help you support your weight loss efforts. A 2013 study found that eating almonds daily may curb appetite and do other nutritionally good things. Snack on about a handful of almonds a day, making sure to eat the antioxidant-rich skins. (Note: This study was paid for by the Almond Board of California, so not exactly an unbiased source—but still, it’s interesting.) Water will help you feel full and keep you from eating more food than you need. I mean plain old water; it’s far, far better than diet drinks or vitamin-enhanced this or that. Drink a full glass before a meal and sip throughout the day from a bottle, glass or mug that you love. If you like a little flavor in your water, try one of these simple, sugar-free recipes. Weight loss doesn’t have to be a single, radical, excruciating ordeal. Positive long-term changes don’t happen like that. Instead, think of it as reshaping the little moments of your life to make space for weight loss. The physical and mental strength and resilience you gain is well worth this subtle but powerful effort.
Leadership Development

How God Gives You His Vision for Your Church Resource