Reaching People Under 40 While Keeping People Over 60: Being Church for All Generations by Edward Hammett 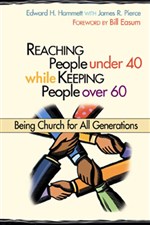 Many established churches are facing a number of challenges in today’s increasingly secular culture. Such a shift in many communities creates a challenge of church growth and church health when it seems that satisfying the needs of one group creates barriers to reaching another group. So many are asking, “How do you keep people over sixty years of age—who often hold church culture values—while at the same time reach people under forty—who often hold postmodern values?” If a church is interested in growing, this situation becomes a major challenge.

"Those who read this book and follow Hammett and Pierce’s coaching will find a win-win approach to reaching both of the cultures present in today’s world. This book should be on the desk of every pastor of an established church for the next two decades."