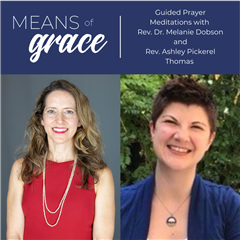 Dr. Melanie Dobson leads a guided practice of Lectio Divina. This four-fold reading of scripture and prayer was developed by Christian monks and practiced for centuries.  It has been reclaimed by Catholics and Protestants alike in the late 20th/early 21st century.  This practice was adapted from Norvene Vest in her book, Gathered in the Word.

Melanie is an ordained elder in the Western North Carolina Conference and an associate professor of Methodist Studies at the Lutheran Theological Southern Seminary in Columbia, SC. She is also a registered yoga teacher, teaching yoga at churches, in retreat settings, and for cancer survivors. She enjoys hiking, cycling, cooking, and being outdoors. She is a single mom to one son, Elijah, who is in 5th grade.

Means of Grace: Project AGAPE - Where We Are, Where We've Been, and Where God is Leading News Article