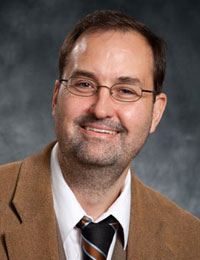 FAYETTEVILLE – Dr. Timothy Larsen, the Carolyn and Fred McManis Professor of Christian Thought at Wheaton College and an Honorary Research Fellow at the University of Wales Trinity Saint David, will be featured during the annual Womack Lectures at Methodist University March 17. Both lectures are free and open to the public. The Womack Lectures will be held in the Physician Assistant Auditorium in the Medical Lecture Hal. There will be two presentations by Larsen. One, titled “Secularization and Religious Decline,” will begin at 11 a.m., and another, titled “The Bible and Western Civilization,” will begin at 2 p.m. “The main reason we picked Dr. Larsen is because he is sensitive to the following issue: What sense are we to make of the fact that many American citizens, citizens of the world, and students at Methodist University consider themselves religious or Christian and yet are biblically illiterate,” said Dr. Kevin Hoffman, chair of the Philosophy and Religion Department. “Some do not even know, for example, that Moses started his career leading the children of Israel out of Egypt by committing manslaughter, or that Jesus has a disciple whom he especially loved. Does this strange state of self-report make us more secular, actually religious, or simply confused? More generally, the issue is about cultural literacy.” Larsen received his doctorate in history from the University of Stirling, Scotland. He is a Fellow of both the Royal Historical Society and the Royal Anthropological Institute, and has been a Visiting Fellow in History at Trinity College, Cambridge; a Visiting Fellow in History at All Souls College, Oxford; and a Visiting Scholar at Northwestern University. Larsen is the author of six monographs including “Crisis of Doubt,” “A People of One Book,” and “The Slain God,” all printed by Oxford University Press. He is the general editor of Oxford University Press’ “Spiritual Lives” series and is a contributing editor for “Books & Culture.” Larsen has written for numerous other popular publications including the Wall Street Journal, Inside Higher Ed, Chronicle of Higher Education, CNN.com, Christian Century, and the Times Literary Supplement. For more information, contact Dr. Hoffman at khoffman@methodist.edu or by calling 910.480.8530.