2500 volunteers pack over 285,000 meals on Sunday Nov. 6 at Good Shepherd UMC[/caption] How do you pack a million meals? One at a time. Over the past five years, Good Shepherd United Methodist Church in Charlotte has packed over one million meals through Stop Hunger Now. It took close to $300,000 dollars in donations, thousands of volunteers and included three major Sunday events, as well as a bunch of smaller Saturday events.  Rev. Talbot Davis pastor of Good Shepherd was informed by the Stop Hunger Now staff that they reached the one million mark on November 6, 2016. Their very first large event was held on Sunday, October 30, 2011 with over 2300 participants who packed 192,320 meals. [Pictures and more information at The Numbers Are In] In 2014, over 2400 gathered for their Radical Impact Day and packed 254,232 meals in just under five hours. [Pictures and more information at Putting A Face On 254,000 Meals] Last Sunday, over 2500 persons came together and packed 285, 294 meals. [More at Stop Hunger Now Rewind] The total of these three major events adds up to 731,846 meals packed. [caption id="attachment_7778" align="alignright" width="300"] 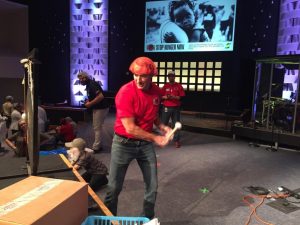 Rev. Talbot Davis bangs the gong for 1 million meals[/caption] According to Davis, the church has participated in numerous smaller Saturday events over the past several years, packing anywhere from 10,000 to 50,000 meals which added around 270,000 to their total. Stop Hunger Now was founded by Ray Buchanan, an ordained United Methodist minister with the vision of ending hunger in his lifetime. It is based out of Raleigh, N.C. and is an international program with offices in 20 cities across the United States, and in South Africa, Malaysia, India, Italy, Peru and the Philippines.  They have involved over 500,000 volunteers in meal packing events, and have packed over 294 million meals since the organization’s founding in 1998.