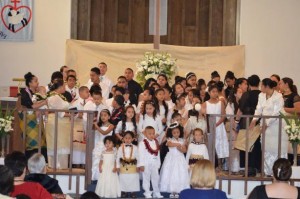 First Tongan United Methodist Church in Seattle had grown so much that it needed to move to a larger building, which it shared for a time with a dwindling white congregation. Last year, the white United Methodist congregation officially disbanded. But the Tongan church is still going strong, with more than 200 members and a flourishing youth group. The church offers recent immigrants and their families the chance to stay connected to their cultural roots within a Wesleyan approach to spiritual development, said member Mele ‘Aho. “They like the way the church is structured, how we do our activities, our devotions, and our volunteering,” she said. The Tongan church’s experience is one of the bright spots in The United Methodist Church’s 2014 U.S. membership figures, newly released by the General Council on Finance and Administration. It also offers a microcosm of what is happening in the U.S. church. The numbers show the U.S. church continuing its membership slide of more than 40 years. By the end of last year, the United States had just under 7.2 million United Methodists, a drop of 1.6 percent from 2013. The most significant drop was among the church’s white majority. At the same time, the church saw slight growth in ethnic diversity - with Pacific Islanders tallying the biggest percent gains. In 2014, the church recorded:

The General Council on Finance and Administration is still gathering data from church regions in Africa, the Philippines and Europe. As of 2012, the global denomination had about 12.4 million members. Moses Kumar, the agency’s top executive, said the 2014 numbers - both the overall decline and areas of growth - reflect better reporting from U.S. conferences. “Leading up to General Conference, a number of bishops have asked their areas to do membership audits,” he said. “While the incremental decline is steady, it looks higher because there are a number of conferences that had decreases because of the audits.” Church leaders are also paying closer attention to ethnic and racial diversity when reporting, he added. Erin Hawkins, the top executive of the United Methodist Commission Religion and Race, sees these numbers as a reason to be cautiously optimistic. Her agency works with churches to find ways to reach more racially and economically diverse people to better reflect their neighborhoods. “This is an interesting data point that might be showing us that there are some things going well in the church,” she said, “while not forgetting that we still are not as diverse as we possibly could be.” Need to reach more people Make no mistake: U.S. membership - which is nearly 90 percent white - still lags behind the ethnic diversity of the U.S. population. A Pew analysis of its 2014 U.S. Religious Landscape Study, released this summer, found that of 29 major religious and religiously unaffiliated groups, The United Methodist Church was the fifth least racially diverse. The only groups less diverse were the Lutheran Church - Missouri Synod, the Evangelical Lutheran Church in America and the historically black American Methodist Episcopal and National Baptist denominations. The analysis said even U.S. Hindus, a small minority, are slightly more racially diverse than U.S. United Methodists. “I don’t want people saying, ‘We’ve turned a corner in the life of the church,’” Hawkins said. “I absolutely think we are not there yet.” But she suggests looking at some of the church experiences behind the numbers to find how to reach “more people, more young people and more diverse people.” How two growing churches reach Tongans For many Tongan immigrants to the U.S., it makes sense to visit a United Methodist church. More than 37 percent of the island’s population belongs to the Free Wesleyan Church, according to the CIA World Factbook. Just because they visit doesn’t mean they’ll join, especially now that Free Wesleyan congregations are starting to form in Hawaii and along the west coast. At both First Tongan United Methodist Church in Seattle and the multiracial First United Methodist Church in Honolulu, a vibrant youth ministry is a big draw for Tongans. These ministries often do triple duty - helping young people develop spiritually, stay connected to cultural traditions like hula and prepare for a future in the United States. ‘Aho, who leads youth at the Seattle church, especially sees her role as helping youth connect with the wider U.S. society as well as with Christ. Beyond the usual Bible studies and fellowship activities, the youth program offers lessons on how to budget, pursue career goals and apply for college - skills newly migrated parents may not be able to impart at home. She proudly noted that all six of the group’s high school graduates this spring are now in college. ‘Aho, who is now a clergy candidate, said the church also emphasizes the importance of community involvement. “We teach them that if they love God they have to serve others too,” she said. Some of the members were initially nervous about their kids attending events outside the church or tight-knit family home, she said. “But after three or four years, they see how their kids are growing - that their kids can pray and stand in front of the public and talk about their walk in faith,” she said. At the Honolulu church, the Tongan membership is growing in part because of growing families. “We have more children than adults,” said the Rev. Linita ‘U. Moa, the congregation’s co-pastor. The challenge is keeping more Americanized youth involved as they grow toward adulthood. Moa said the church has been able to do that by providing them opportunities, like district- and conference-wide events, that “encourage them to see broader ways of working as Methodists.” Moa estimates the church has about 45 active young adults. Increasing the church’s racial and ethnic diversity will continue to be critical if the church wants to make disciples of Jesus Christ, Hawkins said. “There is no mission of The United Methodist Church in the U.S. without a conversation about how we are reaching the mission field here, which will increasingly be communities of color,” she said. Hahn is a multimedia news reporter for United Methodist News Service. Contact her at (615) 742-5470 or newsdesk@umcom.org.

The General Council on Finance and Administration recently launched a new, online website, UMData, containing general statistical information.  To access the site, visit www.umdata.org. The program replace The General Minutes with up-to-date information on local churches, leadership and various statistics. The data on the site comes from conference staffs.