Click Here for More Information on The Continuing UMC
News

In the News: Central UMC, Canton 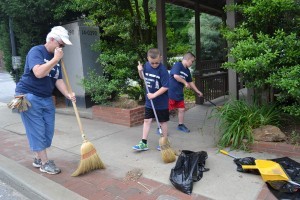 (This article appeared in The Mountaineer (Waynesville, NC) on June 1, 2015.  Reporter/Photographer: Vicki Hyatt) Faith turns from words into actions CANTON — On Sunday, about 150 members of the Canton Central United Methodist Church fanned out across the town to put their faith into action. The day launched Operation Down the Hill, something that will become an annual event. The idea is for people to leave the four walls of the church and minister to others by visiting or writing cards to the lonely, helping those who are unable to get out with outdoor chores, cleaning up the downtown area, passing out water at the International Sports Complex, handing out quarters at the laundromat or delivering treats to those who serve the community. As part of Operation Down the Hill, the Rev. Paul Brown challenged his congregation to do as Jesus did and take the church to the people. Throughout the Bible, faith is only meaningful when it is put into action, he said in a brief sermon before dismissing the congregation into a morning of service. "What God really wants is for justice to roll down like a mighty stream," he said, referencing Matthew 28, otherwise known as the great commission. The faithful could memorize every word of the Apostles Creed or even the Bible, but "if it doesn't make a difference in the way you live, it means nothing." Read the entire article and see the photo essay at The Mountaineer