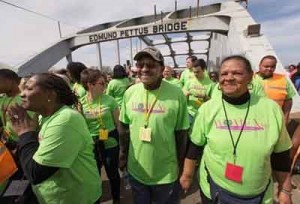 The 50 year commemoration of the walk from Selma got me to thinking...

I was raised in a Methodist parsonage in the State of Kentucky….a state where the true religion is basketball.  Spring break for the public schools was always the week of the High School Basketball Tournament in Louisville so that everyone could go.  Year after year, I went to the tournament.  Year after year, Mr. Basketball for the State of Kentucky was a black athlete.  The All-Star team was filled with very gifted black athletes.  None of them even received a courtesy recruiting call from the University of Kentucky.   Breathing a word of question—much less criticism—toward UK’s legendary Coach Adolph Rupp was unthinkable.  But I knew in my heart something wasn’t right about that.

The public schools in Frankfort integrated the year after we moved there for my father to be pastor at First United Methodist Church.  Three smart, wonderful black students joined my 7th grade class.  I couldn’t figure out why that would cause anyone any difficulty.  But some parents were in overdrive with anger and anxiety.  The 8th grade dance – the big (and only) social event of the year was organized and paid for by the 7th grade.  We did endless bake sales and car washes to scrape together enough money to pay for the band, decorations and refreshments for the end-of-year dance.  So when one of the parents offered to pay all the expenses toward the dance, that looked like one great big gift—except that the offer came with a stipulation.  They would pay all the expenses of the dance on the condition that we did not invite any of the black students.  I knew in my heart that wasn’t right.

And when my father welcomed a distinguished black professor from Kentucky State College and his wife into membership – the historic church’s first black members, some of the longtime members of the church ripped into my father.  They said he should have gotten the approval of the Administrative Board before accepting them as members.  Daddy brought in nearly 1000 new members across his ten year ministry there.  No one thought  he needed the approval of the Board for any of those members.  I knew in my heart that wasn’t right.

The tuggings at my heart were nothing compared to the open racial hostility I encountered when, after graduation, I moved to Mississippi.  There I found good people, Christian people, church-going people who openly supported of racial discrimination. Although I did not know white people who openly dissented from the deeply entrenched practices of segregation, I knew in my heart that wasn’t right.

Doors to women in ministry in Mississippi were closed to women in those years.  Open antagonism toward a woman in the pulpit was widespread.  So I was surprised when, after going a year without any appointment (not supposed to happen in United Methodism), my superintendent called and said a church was asking for me to be their pastor.  A bigger surprise was that the request was from  a black congregation in the heart of the Mississippi Delta.  Would I be willing to go?

I wanted a chance to preach more than anything.  I said yes with a grateful heart.  And that’s where I learned a side of life I had not seen before.  I saw the scars of people who had been beaten for teaching black adults to read in Freedom Schools.  I knew people who had lost their jobs when they went to the Sunflower County Courthouse to try to register to vote—and were turned away with ridiculous standards.   In that strictly segregated town – home of the White Citizen’s Council--I was the first white woman those children had seen face to face– and some of them, at first,  were afraid of me.

As I learned the brutal history of the Mississippi Delta through the lives of these heroic people, I was increasingly humbled.  This first cross-racial appointment in Mississippi could not have been in a more unlikely setting.  I would have understood completely if those people had rejected me--- or even hated me—because of the color of my skin.  Only the most mature Christians could have risen above the racial hatred that was the story of their lives.

When I saw how they accepted me, I knew that anyone and everyone could learn to bridge racial differences.  I wanted my children – and their children—to grow up in a different world.

Change has taken place --  Kentucky’s beloved Cats would not have been competitive without their gifted black athletes.  My 7th grade class refused the financial underwriting that would have excluded black classmates.  Dr. Newton Thomas and his wife were longtime, beloved members of Frankfort First….and a black congregation in the heart of the Mississippi Delta welcomed a white female pastor.

My children and grandchildren did get to grow up in a different atmosphere regarding  race.  In that regard, we have given our children a better world.  My sacrifices have been small compared to the courageous witness of others.  In 2065,  my grandchildren will be 60, 57, 54, 52 and 50.  It is my most cherished hope that they will be telling their children that their grandmother cared when things were not right and did her best to make the world a better place.