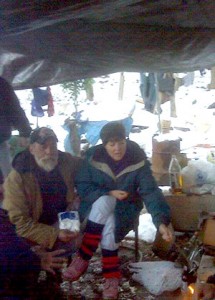 My addiction to alcohol took me to hopelessness and homelessness in the year 2000. I lived in the woods for 12 years after that in the Greensboro area. I was drinking every day and flying a sign to support my habit.

My disease had me so bad that I would wake up shaking so badly that I had to drink a 40 ounce beer just to start my day. Then one day as I returned to my camp from holding a sign and had made enough money for four 40 ounce beers, I found my tent cut up and my stuff thrown everywhere. This was July 1, 2012.

About 20 minutes later some people showed up at the camp with some food. I told them that I wanted to go to Detox. This was on a Saturday. They told me they would take me after church on Sunday. They wanted the church to pray with me.

While at Caring Services,Inc., I worked on my relationship with God and who I was.  I didn’t seek employment right away. I just mowed yards in the neighborhood to pay for my rent there because I was doing homeless outreach with StreetWatch, 16 Cents Ministries, and Church Under the Bridge.

I was StreetWatch’s spokesperson and served on the Church Under the Bridge Board of Directors. I did this all during my first year of sobriety. As the year closed in, I took on a paying job to finish out my two year term with C.S.I.

After a year, I moved to their exit house where I was made Assistant House Manager. While doing this and working a regular job, I continued my homeless outreach. My time was coming to an end for two years. I was planning on moving out  on my own. Because my two years was almost up. Then, one Saturday while I was at the Church Under the Bridge, a gentleman came to me and said, “Mark, I have been watching you and your Facebook page for three months now and my organization needs a man like you to run it.”

I told him, “Whoa! I will have to pray about this and talk with my Sponsor (AA) before giving you an answer.” 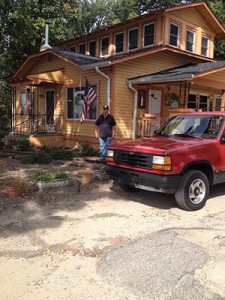 He said, “Good! I was hoping you would say that because I am the Chairman of the Board of Naaman’s Recovery Village in High Point. We need an Executive Director to oversee it and to work with other guys struggling with addictions. We are about to shut the doors due to that there’s no one over the daily operation and we are bankrupt. The only thing we can pay you is room and board.”

The following Friday I called him and accepted the position. I knew that this was God guiding me because I had to quit a paying job and terminate a lease agreement on my own apartment. I officially took over Naaman’s Recovery Village on September 1, 2014.

I still receive no paycheck but the bills are paid to keep the doors open for the guys to get help. By the operation of a Thrift Store, Cleaning Service, Lawn Care (in season), Car Detailing Service and LOVE donations from churches where I go speak.

I just celebrated three years of sobriety on July 2, 2015 and one year anniversary at Naaman’s Recovery Village on September 1, 2015.

My story continues with God as I walk with His faith…