Loving God in the Trenches 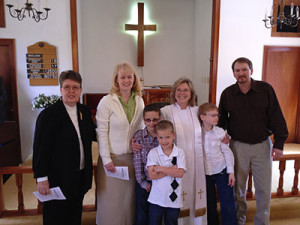 The same church that taught me “God is Love” was now kicking me out of leadership for extending God’s love. It was the early 90’s and ignorance and fear about HIV/AIDS were rampant. The local high school where my son was a freshman had agreed to have a young man who was HIV-positive speak to the students in an assembly. My son was to be honored for scholastic achievement that morning at the end of the assembly, so I went early to get a good seat on the front row of the auditorium.

I was serving as a youth coordinator for the local Southern Baptist association of 47 churches. I had completed seminary and served on church staffs in education, youth and senior adult ministries, and most recently, as associate pastor in a Southern Baptist church in the eastern part of North Carolina. I was ordained while serving there. It was rare – almost unheard of – for Southern Baptist churches to ordain women, but the ordination committee of pastors from the association had been convinced of my calling and my gifts.

The young man speaking to the high school students told us he had been a drug user and had contracted HIV from dirty needles. As a youth minister I had read about AIDS and after he spoke I strode over to him to shake his hand and thank him for his courageous and touching testimony. He was surprised at my outstretched hand. “Most people avoid touching me,” he said, “fearing catching the disease in a handshake.” We spoke for a few minutes and then he left and I resumed my seat, waiting to applaud my son.

The next weeks saw a furor in the community. The alarm was sounded by two mothers who had left the assembly in the middle of the young man’s speech, upset that school administrators had allowed such information to be offered to students. In those days many people thought of AIDS only as a homosexual disease and so the fear behind the anger in the community was aimed at homosexuals as well as AIDS. Rumors ran wild about what was said at the school assembly. Leaflets on homosexual relationships, with pictures that would make a hardened criminal blush, were passed around in churches. The School Board was contacted and a meeting was scheduled to be held at the middle school cafeteria because it would be large enough for the crowd.

I knew that I needed to attend the school board meeting, although I dreaded facing my neighbors and friends in their fear. I had heard the young man speak. I didn’t have to rely on hearsay. In my heart I hoped I could bring truth to calm the fever of the community. I prayed for grace and love to be evident in whatever I might be led to say.

Many people spoke in ignorance of what had actually been said at the assembly. There were many homophobic comments. I came to the microphone to bear truth about the young man’s speech and my understanding of who we were as a community of mostly Christians. I looked out on the faces of the crowd. Among them were most of the pastors of the associational churches I served.

I told the gathered group that the young man said he had contracted HIV from drug needle use. There had been no lecture on homosexuality. I had not heard this young man say students needed to use condoms. Further, I found this young man to be a person seeking to do something positive with the days he had left, warning students not to follow the path he had taken. Then I said, “My faith teaches me that when a person turns his life around and seeks to make amends, he is moving toward God. He should be encouraged.”

The crowd was silent for a moment. Then a woman from the back, who knew me, hollered out accusingly, “Janet, if your son was having sex would you buy him condoms?” The eyes turned back to me. I stated, with amusement, “If anyone ever told me I would stand in front of a crowd like this and discuss condoms, I would not have believed it!” The room broke up in laughter and the school board chairman regained control and concluded the meeting. A few days later I was asked to come to the associational office for a meeting. I went to face four pastors in leadership in the association. None of them had seminary training. They proceeded to question my education and my faith by asking questions like, “Who wrote the first five books of the Bible?” I tried to move the discussion to passages like Galatians’ list of the fruits of the Spirit but they would have none of it. At the end of their interrogation they looked at one another and then at me. “You are no longer allowed to serve in any capacity in our association, including the women’s groups.” Effectively, I had been “churched.”

In the following days this group of men and their followers enlisted one of their own to run for school board. They wanted to clear the schools of administrators and teachers that would allow assemblies that talked about AIDS. I found I had a lot of free time on my hands, and, while I had been calm in my talking at the school board meeting and with the associational leaders during their interrogation, I was angry. I decided to run for school board.

After all was said and done, an audio tape of the offending assembly was found and the transcript was published on the front page of the local newspaper. It confirmed everything I had said. I was elected to the school board. And after four years of service there I went on to become a county commissioner, building two new schools, buying property for a third and for a new community college.

For a long time I could not go to church where a man was preaching. I went into counseling. I sojourned for a while with the Quaker congregation in a nearby town. I divorced from my husband who had remained silent and unsupportive during the turmoil.

But one day I woke to a new life, with a husband who is my champion and encourager, to a church that welcomed me and affirmed my gifts by asking me to serve as a pastor. And I realized that God had been faithful through it all.

For  surely I know the plans I have for you, says the Lord, plans for your welfare and not for harm, to give you a future with hope. Jeremiah 29:11. We know that all things work together for good for those who love God, who are called according to his purpose. Romans 8:28

Thanks be to God.