I like Mary Oliver. I really do. But that quote of hers is everywhere: posters, Pinterest boards, greeting cards, pillows. And it stresses me out.

Tell me, what is it you plan to do
with your one wild and precious life?

These are the last two lines of Oliver’s “The Summer Day,” which is a nice poem (really!). But this quote, taken out of its context and hand-lettered on a motivational journal, bothers me. I read it and want to rub my temples, roll my eyes.

I’ll tell you, what it is I plan to do:
Everything! Nothing! I DON’T KNOW!

I understand that her quote can be read in an inspirational, carpe-some-diem way. But when I encounter Oliver’s words in the wild, they remind me of the world’s infinite possibilities and the fact that I have one — one! — life in which to explore only a few of them. Then an existential fear of missing out sets in while the careers I’ll never have and the countries I’ll never live in all flash before my eyes.

When these brushes with my own limitedness take place, the temptation for me (and I suspect for many others) is to try to wring purpose and productivity out of every second — and when that inevitably does not happen, to feel guilty and try the wringing again.

I’m grateful, though, to have run into a few helpful companions for figuring out a better relationship with time: how we might move from mindsets of mastery and control to something more like acceptance, amicability and openness.

Oliver Burkeman is a former “productivity geek” whose book “Four Thousand Weeks: Time Management for Mortals” was released last year. I saw it tagged as self-help the other day and had to laugh, because it’s really a rebuttal of so many ways self-help books teach us to “master” time.

Burkeman’s argument is contained within the title: the average human life span consists of about 4,000 weeks, and we must recognize our limits. He describes his work as “an exploration of a saner way of relating to time and a toolbox of practical ideas for doing so, drawn from the work of philosophers, psychologists, and spiritual teachers who all rejected the struggle to dominate or master it.”

And spoiler: We won’t get to do everything. Cue my existential FOMO.

But Burkeman’s point is that this should be a liberating truth. He writes about what he sees as “the only definitive measure of what it means to have used your weeks well”: that by “working within the limits of your moment in history, and your finite time and talents, you actually got around to doing — and made life more luminous for the rest of us by doing — whatever magnificent task or weird little thing it was that you came here for.”

We can’t do it all, but what we do — whether magnificent and huge or weird and little — is what we came here to do.

I started off this year with an experiment in spreadsheet form. It broke the weeks down into 30-minute chunks that I would fill in with what I did as the days went by.

I opened it up that first Monday in January and immediately wondered (read: angsted) about how much detail I should be going into. Should I just write in “worked” for 8:30-9 a.m.? Or detail “read a few emails, ate breakfast, checked social accounts, sent Teams messages”? I eventually settled for something in the middle, a few quick words that would give me the general gist of what had happened in that half-hour.

Laura Vanderkam, the author and podcaster hosting this New Year’s challenge, wrote in an email to participants that over the course of a week “your primary goal is to track your time so you can see where your hours go. The first step to using your time better is knowing how you’re spending it now.”

It was all a bit intense, a little daunting. But recapping my half-hours became easier, and at the end of the week I was able to look back and find some insights, some reassurances, some surprises — and the realization that so little, and so much, make up a day.

I interviewed Kate Bowler right around the time an essay of hers, “One Thing I Don’t Plan to Do Before I Die Is Make a Bucket List,” appeared in the New York Times.

In it, she wrote: “I did not understand that one future comes at the exclusion of all others. Everybody pretends that you die only once. But that’s not true. You can die a thousand possible futures in the course of a single, stupid life.”

At the close of the essay, she describes our lives as “unfinished and unfinishable. We do too much, never enough and are done before we’ve even started.”

It might sound bleak, but of course we all know it’s true. And that’s what I love about Kate’s essay, and the time-tracking experiment, and Burkeman’s book: they tell the truth. There are no illusions of doing, seeing, being it all.

Bless them for it.

Click the link to view the original article, titled, "When wringing every moment out of the day still isn’t enough"
Image from iStock / Sorbetto 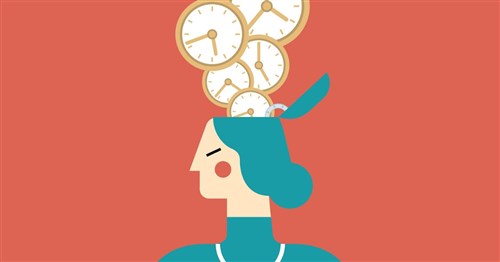