What Makes Some People More Resilient Than Others

This article is part of a series on resilience in troubled times — what we can learn about it from history and personal experiences.

A few years ago, an unimaginable thing happened in my life. I wanted to help someone I cared about, someone who was sick with an illness he was hiding. I went to his house, intent on a rescue operation that would end, I thought, with a trip to the emergency room. Instead, it ended with a trip to the morgue. What I found when I arrived was my ex-husband, dead on his bathroom floor. The hidden illness? An intravenous drug addiction.

It was, without question, the most traumatic event of my life, but not only mine. I had two teenage children at the time, who had unknowingly been given a front-row seat to their father’s slow suicide. It took two years for me to settle my ex-husband’s estate, which was thrown into probate, and meant a kind of suspended traumatic animation for me, as I continued to live in what felt like a constant state of emergency.

Back then, I thought we would never really recover, that our lives would always be stained with this terrible sadness. But now, nearly five years later, we’re doing well — really well. Or we were, until recently, when along with the rest of the world we began living through the current convergence of crises.

It turns out that awful time in my life was good training for a pandemic, for political and social upheaval, for economic and financial uncertainty. The experience taught me that I never really know what’s going to happen next. I plan as best I can, but now I’m far more able to pivot my thinking. I have the capacity to cope with more of life’s unexpected slings and arrows, to accept the difficulties I face, and keep going, even though it can be hard.

How we navigate a crisis or traumatic event (and the coronavirus has many characteristics of trauma because it is unpredictable and uncontrollable) depends, in large part, on how resilient we are. Resilience is the ability to recover from difficult experiences and setbacks, to adapt, move forward, and sometimes even experience growth.

An individual’s resilience is dictated by a combination of genetics, personal history, environment, and situational context. So far, research has found the genetic part to be relatively small.

“The way I think about it is that there are temperamental or personality characteristics that are genetically influenced, like risk-taking, or whether you’re an introvert or extrovert,” said Karestan Koenen, professor of psychiatric epidemiology at Harvard’s T.H. Chan School of Public Health.

Professor Koenen studies how genes shape our risk of post-traumatic stress disorder. “We all know people that are just very even-tempered,” she said. “Some of that is simply how we’re built physiologically.” Yet it isn’t true that some people are born more resilient than others, said Professor Koenen, “That’s because almost any trait can be a positive or negative, depending on the situation.”

Far more important, it seems, is an individual’s history.

The most significant determinant of resilience — noted in nearly every review or study of resilience in the last 50 years — is the quality of our close personal relationships, especially with parents and primary caregivers. Early attachments to parents play a crucial, lifelong role in human adaptation.

“How loved you felt as a child is a great predictor of how you manage all kinds of difficult situations later in life,” said Bessel van der Kolk, a professor of psychiatry at Boston University School of Medicine who has been researching post-traumatic stress since the 1970s. He is the founder of the Trauma Research Foundation in Boston.

Dr. van der Kolk said long-term studies showed that the first 20 years of life were especially critical. “Different traumas at different ages have their own impacts on our perceptions, interpretations, and expectations; these early experiences sculpt the brain, because it is a use-dependent organ,” he said.

You can think of resilience as a set of skills that can be, and often is, learned. Part of the skill-building comes from exposure to very difficult — but manageable — experiences, like the one my children and I had.

“Stress isn’t all bad,” said Steven M. Southwick, professor emeritus of psychiatry, PTSD and Resilience at Yale University School of Medicine and co-author of the book “Resilience: The Science of Mastering Life’s Greatest Challenges.” If you can cope today with all that’s happening in the world around you, Dr. Southwick said, “then when you are on the other side of it, you’ll be stronger.”

How we cope depends on what is in our resilience toolbox. For some people, like my ex-husband, the toolbox is filled with drugs. For others, it can be drinking, overeating, gambling, shopping. But these don’t promote resilience.

Instead, the tools common to resilient people are optimism (that is also realistic), a moral compass, religious or spiritual beliefs, cognitive and emotional flexibility, and social connectedness. The most resilient among us are people who generally don’t dwell on the negative, who look for opportunities that might exist even in the darkest times. During a quarantine, for example, a resilient person might decide it is a good time to start a meditation practice, take an online course, or learn to play guitar.

Research has shown that dedication to a worthy cause or a belief in something greater than oneself — religiously or spiritually — has a resilience-enhancing effect, as does the ability to be flexible in your thinking.

“Many, many resilient people learn to carefully accept what they can’t change about a situation and then ask themselves what they can actually change,” Dr. Southwick said. Conversely, banging your head against the wall and fretting endlessly about not being able to change things has the opposite effect, lessening your ability to cope.

Dr. Southwick has done many studies with former prisoners of war and has found that although they suffered profoundly, many eventually found new areas of growth and meaning in their lives. This happened to me, too. After my own tragic experience, I headed back to school for a master’s degree in social work.

But when I was still in the thick of it, five years ago, I felt overwhelmed and hopeless, weighed down by worries. The way I got through that was to narrow my thinking. Instead of worrying about what life would be like next week or month or year — How long would it take to get through probate? Would my daughter be able to go back to college? If I had gone to my ex-husband’s house a day earlier, could I have saved him? — I worked hard to stay focused on the here and now and not give in to ruminations about the past or the future, which I couldn’t change or control.

In my fieldwork now as a social work student, I provide support for people who have cancer — also a traumatic experience — and I often counsel them to stay grounded in the present moment and focus on their strengths, because imagining every worst-case scenario is pointless and only increases anxiety.

“Each of us has to figure out what our particular challenges are and then determine how to get through them, at the current moment in time,” advised George Bonanno, a professor of clinical psychology and director of the Loss, Trauma, and Emotion Lab at Columbia University Teachers College. The good news, he said, is that most of us will. Professor Bonanno’s lab reviewed 67 studies of people who experienced all kinds of traumatic events. “I’m talking mass shootings, hurricanes, spinal cord injuries, things like that,” he said. “And two-thirds were found to be resilient. Two-thirds were able to function very well in a short period of time.”

Eilene Zimmerman is author of the memoir “Smacked: A Story of White-Collar Ambition, Addiction and Tragedy.”

How to Build Resilience

Interviews with large numbers of highly resilient individuals — those who have experienced a great deal of adversity and have come through it successfully — show they share the following characteristics.

They have a social support system, and they support others. “Very few resilient people,” said Dr. Southwick, “go it alone.”

Click the link to find the original article titled, "What makes some people more resilient than others." 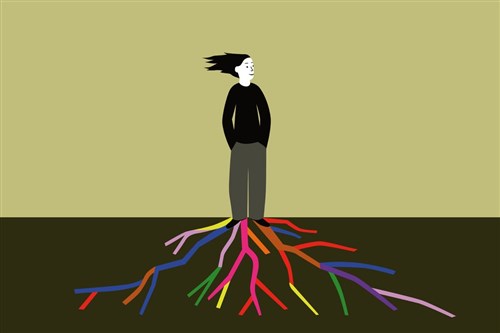