by Corey Sees, parishioner at Church of Our Saviour in Akron, Ohio.

I first attended an Episcopal Church and experienced Morning Prayer in college when a friend invited me to go with him to the beautiful stone church right off-campus during a break between classes. Since graduating and moving away, I’ve never lived near another parish that regularly offered the Daily Office; with limited success, I spent years trying to incorporate it into my private prayer life. Finally, a couple years ago, armed with the exciting knowledge that our first child was on the way and considering the example of faith and prayer I wanted to set for him as he grew up, I decided that Lent was my moment. What better time to take up a daily pattern of prayer?

Of course, I failed miserably. I don’t think I even prayed Compline more than twice in all those 40 days.

Thankfully, my parish priest reminded me that it’s never too late to start praying. I finally fell into a regular habit of the Daily Office that Eastertide thanks to the encouragement of other Episcopalians and Anglicans on Twitter and the aid of St. Bede’s Breviary. It’s a journey that has continued through the anxious and exciting days before the delivery of our child, the joyous and bewildering days immediately after his birth, and many late nights or early mornings while also praying that he would just go back to sleep.

This year, however, I was hit with two life-changing events: at the beginning of the pandemic I was furloughed and took up a new job as an unintentional-but-grateful stay-at-home-dad, and, just a few months later, my son took his first steps and transitioned into life as a toddler. Some mornings he sleeps late enough or I wake early enough that I can say Morning Prayer in blissful, uninterrupted quiet, but more often than not, he is my unruly companion in prayer. Here are some things I have learned about praying Morning Prayer with a toddler:

Sometimes you have to pray the Office in stations over the course of the whole morning. Psalms make great stories to read over breakfast. Canticles become songs you sing together while playing with blocks. The Creed gets recited from memory while changing a diaper. The collects take on a deep sense of relief when he finally goes down for a nap. Sometimes “Morning” Prayer doesn’t just mean “prayers you say in the morning,” but also “it literally took me all morning to say these prayers!”

Speaking of interruptions, the rubrics on page 142 of the Book of Common Prayer allow for a non-Biblical reading to be included. I’m sure the intent was to include writings from the early Church, but I’ve discovered that sometimes this means Morning Prayer includes a reading from the Book of the Wheels on the Bus. (They go round and round, world without end. Amen.) Make sure you read it with all appropriate solemnity.

Memorizing verses of scripture was a huge part of my early faith formation, but something I largely wrote off as “too evangelical” and abandoned in adulthood. Now, trying to pray while also attending to a small, adventurous explorer who occasionally demands not only eyes to watch him, but also hands to catch him as he tries to climb all over the furniture,  I have rediscovered memorization. It began as a practical necessity and grew into a joy. The canticles, psalms, collects, and prayers I’ve been able to commit to memory don’t just free me up for a few moments during Morning prayer; they have become prayers I turn to throughout my entire day.

I never used to pay any attention to the “posture rubrics.” Sometimes Evening Prayer was said completely horizontally before finally going to sleep. Often Morning Prayer was chanted softly in the rocking chair in a (mostly successful) attempt to get my kid back to sleep at 4:00 am. Since churches have had to close, however, I realized that this rhythm of standing, sitting, and kneeling was missing from my prayer life. This has led to some interesting reactions from a curious toddler. Sometimes, kneeling is the best thing in the world; he sees me come down to his level, so he gives me a big hug and nuzzles into me as I pray. From there, it’s not hard to see myself in his place, finding comfort, joy, and security in God during the prayers. Other times, kneeling presents him with the perfect opportunity to brace himself against me and poop right in the middle of the Lord’s Prayer. (See above: prayer with a toddler is full of interruptions!) To be fair, I imagine this is often how God feels about me during the confession.

On days that I’m lucky, he will consent to sitting in my lap during the Psalms or playing contentedly with his trains. On other days, it’s up to me to provide entertainment while I pray. As anyone with small children or cats knows, our money is wasted on toys. Here is a sampling of the improvised toys that have provided hours of entertainment:

Between the Psalms, lessons, and canticles, Holy Scripture takes center stage in the Daily Office. Reading these stories, poems, and songs takes on a whole new life when you read them to someone else for the first time. Sometimes it’s just the shift in tone and cadence that happens while trying to keep a child entertained that makes it feel fresh and new in my own ears, infusing them with a life and meaning that I never noticed. Often, they have become rote and are rescued from monotony by a pair of new ears. Other times the joys and worries of parenthood have given certain stories an emotional weight that I had not felt before: the binding of Isaac, the birth of Moses, David’s lament over Absalom, the slaughter of the Holy Innocents, Zechariah’s hopes for the infant John in the Benedictus, the raw joy of the Incarnation, Mary and Joseph’s fear and relief upon losing the child Jesus and finding him again in the temple, etc. Even the Apostles’ Creed has a new resonance after experiencing my son’s Baptism. I am reminded that more than a short statement of faith, the Creed is the foundation of our Baptismal Covenant. I am suddenly standing back at the font, holding my child, reciting the Creed in response to the priest’s questions, and recalling my own Baptism every time I say “I believe in God, the Father Almighty…”

Yes, part of the reason I pray Morning Prayer with him most mornings is that waking up before he does isn’t always fun or easy, but more than that, I want him to grow up with prayer as a regular part of his life. I want him to grow up used to the idea of praying with other people, and especially with his family. I want him to grow up knowing both that I’m never too busy for him, and that you’re never too busy to pray. I want him to grow up knowing that you don’t have to wait for perfect, quiet moments of prayer, but that every moment, even the most chaotic moment, can be a holy moment if you make the effort to notice God’s presence. And I always close our Morning Prayer together with the Prayer of St. Chrysostom, because, even if he spent the morning playing with blocks, trying to jump off the sofa, asking me to read the same Noisy Trucks book twenty times, pulling the ribbon bookmarks out of my BCP, and just generally being a toddler, with all the adorable, frustrating, loving, and occasionally gross things that entails, I want him to grow up knowing that God has given us this time together, that it is filled with grace, that God is in the midst of us, and because of all that, even time spent playing with alphabet puzzles and train sets can be a holy prayer. 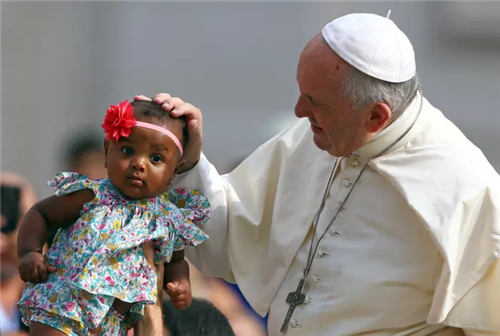