The Future of the Church is to Give it Away

When I took the Clifton StrengthsFinder a couple of years ago, it revealed something my husband swears he already knew: I am a futurist, and probably to a fault. Toward the bottom of my results are “Context” (gathering wisdom from the past) and “Adaptability” (the ability to live in the moment.)  So I tend to either drive others crazy – or make them laugh – when I get going on the future of the Church, of the planet, or anything else. And sometimes I start to remind even myself of one of those doomsday preppers you watch on reality T.V.

So thanks for humoring me as I shout from my soapbox: “Thirty years from now is going to come a great moment of reckoning, and we the Church had better start prepping!”

Prepping for what? Well, at least three major paradigm shifts affecting my world are destined to collide around the year 2050.

First, and maybe most well known, is that 2050 is the year by which the International Panel on Climate Change says we’ve got to cut carbon emissions to “net zero” in order to avoid the catastrophic effects of warming our planet by more than 1.5 degrees celsius.

Second, 2050 is around the time Dwight Zscheile, an Episcopal priest and professor at Luther Seminary, told Episcopal News Service that there will statistically be no one left in worship in the entire Episcopal denomination. That’s a little behind the ECLA and a bit ahead of some other Mainline churches.

Third, by 2050 – a bit before, actually – the U.S. will have become a nation with a majority non-White population.

The first paradigm shift, of course, reflects a truly existential crisis. It’s hard for me to imagine the magnitude of displacement, uncertainty, and suffering the climate crisis may cause. I see missional leaders across the Church thinking about how they can prepare the ground now for what’s to come – whether it’s by creating a community culture that provides accountability for making sustainable decisions in its members’ personal lives, or by purchasing land that might eventually house an influx of climate refugees. I’m praying for them to prophetically lead the rest of us into a new, more sustainable way of life.

My own life has prepared me to talk deeply about the second and third shifts and the fact that they are intimately connected. At a recent conference called Church Planting in the Asian Diaspora, my friend and colleague, the Rev. Fred Vergara, spoke about an inevitable “re-peopling” of the Episcopal Church. Currently, the Episcopal denomination is largely led and attended by an older, white, affluent population. Many of them have served it faithfully for decades. They’ve started and operated soup kitchens and built Habitat houses. They taught Sunday School and did their best to defend their GenX and Millennial aged children from the damaging influence of fundamentalist Christianity that was so influential in our schools and in popular teen literature. They polished silver vessels, washed and ironed altar linens, served on parish councils, built gorgeous church buildings, and set up endowments. They’ve fought over the ordination of women, the full inclusion of LGBTQ people, and whether to hold in-person worship during a pandemic.

Not everything the Church’s members have done over the last fifty years has been noble. Many “flighted” to white suburbs, leaving behind poorer urban school districts, neighborhoods, businesses and churches. The growth of suburbs led to an Episcopal church-planting boom from roughly 1960-1990. Many of these plants adopted at least some of the pragmatic Church Growth Movement mindset of the time. For example, there is the reality that invitation to church (or evangelism) comes more easily, and numerical growth is achieved much faster, when churches are planted among people of the same ethnic background and socio-economic and education levels. As many of the new suburbs were homogenous, and plants succeeded (at least with the benefit of hindsight’s “survivor’s bias”), this led to a widespread adoption of an axiom that contains some hints of prosperity theology: namely, that if a congregation is faithful and being run in a healthy and effective way, it will increase in number. Unfortunately, dioceses too often have believed this principle across the board without taking into account the types of resistance experienced by local communities, particularly urban neighborhoods and communities of color.

But that era is coming to an end. A few weeks after the death of George Floyd at the hands of a White policeman, my husband and I attended a couple of the Black Lives Matter protests in Birmingham, Alabama. Ten months later, we were in Linn Park at a Vigil mourning the victims of anti-Asian violence, including eight people killed in Atlanta. The average age must have been around thirty at BLM, though there were plenty of families as well. There were Black people, Asians, White people, and even more, like me, of mixed ethnicities. The vigil drew fewer White supporters, but must have drawn nearly three hundred Birmingham residents of East and South Asian descent – a gathering of Asian solidarity unprecedented in Birmingham, to my knowledge.  These gatherings were invigorating, refreshing and…a very, very different demographic and dynamic than tend to show up at an Episcopal Church on Sunday morning.

It feels like the 2020s are the beginning of an era that values diversity and is striving to become repairers of the breach among races, cultures and classes. In the words of my friend and church historian Brandt Montgomery, “The days of the segregated church are over…forty-eight percent of the post-Millennial generation is not white.” The Incarnate Church of this era will have its own problems and blind spots, but they will be different from what came before. As a futuristic thinker, I’m not inclined to beat up on existing congregations for being homogenous, affluent, in decline, etc. We’ve simply come to a tipping point where things cannot naturally remain the same and when the richest experience we can offer our own souls is to go along with the movement of the Spirit, even when it means giving up things we’d once thought of as non-negotiable.

In other words, as demographics and values shift, and as the religious culture of America changes and Mainline churches decline, we must be spiritually prepared to pass on our buildings, traditions, and endowments to the next people who can use them.

Notice the difference between the statement above and the usual refrain which goes something like: “we need to figure out how to be more diverse.” This actually isn’t about selling ethnic minorities on our beloved traditions so that our communities might better reflect the Kingdom of God. Rather, standing here at the tipping point, churches must start asking, “How do we prepare to give our beloved church to people who don’t look and act like us?” For those of us who aren’t a majority ethnicity or culture, what courageous action do we need to take in order to bring our whole selves to a church that wasn’t tailor made for us but with which we are now entrusted?”

How do we get ready for a graceful paradigm shift? Partly by asking the Episcopal Church and other Mainline churches – as they are now – to be intentional about raising up leaders with strong multicultural skills. We can start by identifying people who have been doing this kind of cultural adaptation their whole lives: the children and grandchildren of non-White immigrants, “third culture kids,” and people who for other reasons have never quite felt “on the inside.” This will mean changing the way we do discernment processes and preparation for Holy Orders. It will also drastically change the way we define “success” and “financial sustainability.”

We can also start strategically planting new worshiping communities, which tend to garner excitement and reach different populations than are in our existing parishes. All this begins with a fresh and honest look outside the walls of our church buildings and asking the Gospel of Luke’s ageless question, “And who is my neighbor?”

And it does help to have folks with the StrengthsFinder gift of “Context.” After all, the re-peopling of the Church isn’t inevitable just based on research and statistics. It’s inevitable because the entire history of Christianity has been about re-peopling, ever since the full inclusion of the Gentiles that started on the Day of Pentecost. In Acts 17, Paul invites the Athenians to bring ALL of who they are to the new faith. “Bring your statue, bring your poets,” and together we’ll walk the way of Jesus.

Let’s not take that amazing first century shift for granted. Paul was doing a crazy thing when he started preaching to those Athenians! He was offering the Church, which still had its roots buried DEEP in millennia of Semitic language, scripture and tradition, to people who shared none of it. To people who might take the whole thing and mess it up! In fact, Peter and many of the other early Christians were convinced that the Gentiles would do just that: change and mess up their beloved faith and traditions. And, in fact, they did. What had those first apostles been thinking, looking down from their place in the cloud of witnesses, as enthusiastic new Christians declared a pagan holiday to be the birthday of Christ, started wearing funny tufted liturgical hats, composed new songs, and created new metaphors to speak the Good News?

When these shifts start to hit the Mainline Church, I imagine it’s going to feel a little like the moment a dozen years or so ago when I inherited my grandmother’s engagement ring. The style was what I thought of as a “little old lady ring,” with a large diamond and two smaller ones set up on high prongs. When I was a little girl, my grandmother would show me the ring on her finger and tell me that it would be mine when she passed on. And, when Josiah and I got engaged, there was no ring I would have rather had. However, much to my mother’s utter dismay, we had it sent off to a company that specializes in redesigning vintage jewelry into more modern design – all the same gold and gems, but restyled and resized for me. It took my mom a few years, but she finally did accept that it was the same ring.

To fully invite people into a life in Christ, we must invite them to bring their whole selves. We’re going to have to be okay with the inevitable restyling and resizing that will and should happen. The Church has carried on because sometimes willingly and often unwillingly, it’s been swept up in the Spirit that compels it to hand over everything it has to people who look, sound, and love differently.

So, how do we make the most of the current moment, the Church’s rich history, and clues to the future to become ready for what the Spirit gets up to next?  Click the link to read the original article titled, "The Future of the Church is to Give it Away." 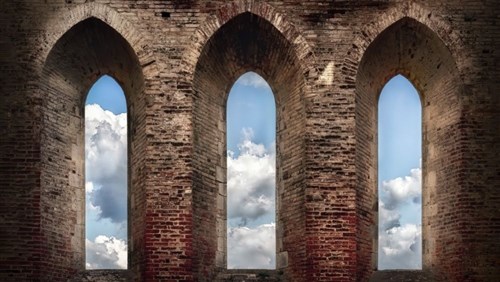