Reforming What Was Deformed

Listen to the Podcast here

Notes from the Edge

A Note from Parker


Growing up in white, middle-class, middle America, I learned some “rules of etiquette” early on. My parents made it clear to us kids that breaking these rules would carry penalties, ranging from “No dessert tonight!” to “No hanging out with friends after school next week!” Some of those rules still make sense to me; e.g., “Don’t chew with your mouth open!” But others have become seriously dysfunctional; e.g., “No talking about religion or politics at the dinner table or in polite company!”

I’ve been thinking a lot about the latter as I listen to people say, “I’m really worried about the decline of our democracy, but I feel powerless to do anything about it.” My response is simple: “Well, all of us have other folks within easy reach. We could talk about our fears and hopes with family, friends, and neighbors—and that might make a difference with people we care about who’ve fallen prey to toxic brews of religion and politics.”

Why, I’ve wondered, do so many people get the “deer in the headlights” look when I suggest that option? Has the rule many of us learned at home rendered us powerless to even try to make a difference among the people who are easily within our reach?

Where might we go with each other if we began with questions like, “What's the primary source of meaning in your life?” or "What kinds of 'power over' are you willing to accept, and what kinds do you refuse to accept?” Thoughtfully pursued, with careful listening, questions like these could take us beneath the stormy surface of religion and politics to the quiet depths where most of us live.

Shouldn’t conversations of that sort be close to the heart of the various forms of “life together”? If weather, sports, and the price of gas are the only topics we can explore with each other, what does that say about the quality of our relationships? Most folks have more meaningful matters on their minds—we hope this podcast will encourage you to pursue them with people close to you.

A Note from Carrie


I really appreciated our podcast conversation this week. With an onslaught of grievous rulings from a packed and activist ultra-conservative court, I'm wrestling with how to hold outrage and grief with in creative tension with hope, love and daily action. In our podcast we revisit a Buddhist story about how we hold suffering.  Here's the story in a nutshell:

In our podcast we explore how to acknowledge the "salt" we are feeling and holding that salt with a wider sense of things, to not get stuck but find where there is still possibility for conversation and agency. We can argue endlessly about religious or political specifics (the virgin birth. or former presidents under criminal investigation), but what might happen or shift if we step away from debates like that and begin telling one another deeper stories about what gives life meaning and how power has been rightly used or abused in our own experience? The salt is the same, but they way we are holding it allows for a wider possibility.

It is possible to hold outrage and the power of transformative grace and love at the same time, but it is not always easy. I invite you to join Parker and me as we explore the complexity of staying in conversation, effecting positive change in daily and personal ways. 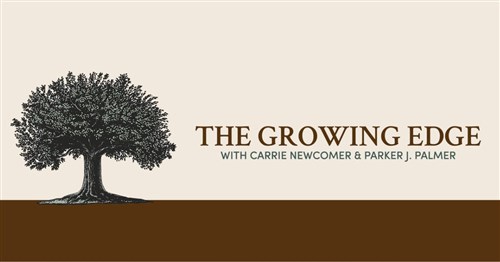