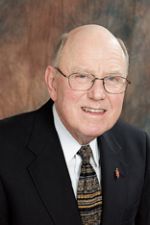 We learned on Tuesday, March 6, 2018 of the death of Bishop Bevel Jones.  We express our prayers and condolences to the Jones family, and to all of their friends and associates.

He was elected to the episcopacy at the 1984 Southeastern Jurisdictional Conference, he was assigned to the Charlotte area and served the Western North Carolina Conference until his retirement in 1996.

He served as the Vice Chair of the General Commission on Religion and Race (1984-1988), President of United Methodist Communications (1992-1996) and President of the North American Section of the World Methodist Council (1991-1996).

He was preceded in death by his wife, Mildred "Tuck" Jones.  They were married in 1949 at First Methodist, Decatur, where Bev had been Assistant Pastor during seminary. They are survived by three children: David Bevel, minister; Mark Edward, commercial artist; and Sharon Brewer, Alliance Theater; and six grandchildren.

Funeral arrangements will be forthcoming.