When I first attended a meal at Grace Kitchen in the Pugh Center of Sparta United Methodist Church, I was impressed by the diverse diners that had come together that Wednesday evening. Conversation flowed freely and a warm spirit seemed to hang in the air. 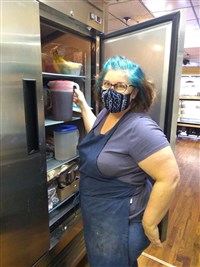 In biblical terms, Grace is divine offering not given as a reward for service, but a free gift or blessing. Organizer Wren Kilmartin was pointed in saying that Grace Kitchen’s purpose was not just a free meal, but an opportunity for people from across the county to come together and experience community. In discussing the program with another friend, she reminded me that people are often hungry for more than just food.
Some of the diners were there for the Wednesday night programs that followed the meals. Others were there just for the meal.

There were grandmothers with grandchildren, seniors gathered around a table with friends, and young couples with families. Like me, there were folks in casual business attire. The clothes of others reflected work outdoors. The mix of people reflected our community.

I sat down with one mother who I was acquainted with. With me and her three youngsters, we occupied all the seats at the round table. “We don’t really need a free meal,” she commented,  “but it is nice to have one day of the week when I don’t have to fix supper for the four of us.”
In the Wednesdays that followed, I noticed that some participants made a point of sitting with different diners each week, introducing themselves to those seated there, making sure that everyone received a warm welcome. 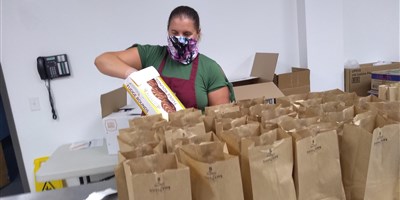 I tried to be one of those community builders, but often I found myself beside an old friend or two who I hadn’t seen in a long while, sharing news of our lives.

I did a story on the program in the July 4, 2018, issue of this newspaper and learned that the Pugh Center was open after school. It had become a safe gathering place for youngsters, not just those associated with the Methodist Church, but any and all youngsters.

The Pugh Center floor is striped as a basketball court with portable goals at either end and there was usually a pick-up game before the meal. Meals are served from 4:30 to 6 p.m. A few minutes after 4, someone would ask that the basketballs be put away. Most of the time, those youngsters took it upon themselves to set out the table and chairs for the meals.

I often hear adults despairing that youngsters today don’t hold themselves to the same high values that they did in their youth. I’m not sure I agree. This was one of many times I’ve seen local youngsters willingly providing helping hands.

I’m a member of several non-profits that  raise funds or provide services to benefit the community, but I wasn’t a volunteer who put time and effort into making good things a reality. So I began coming early to help prepare the meals.

The work in the kitchen operates on the principle of organized chaos. Becca Babbitt oversees the meals, but no one has specific duties, rather everyone finds a task to do or someone to help toward getting everything prepared. Amazingly, it always seems to come together by 4:30 and that same warm spirit that I experienced in the dining area powers the volunteers in the kitchen.

Meals can be as simple as hot dogs, chips, slaw and fruit or cookies for dessert. Or they can be the same recipes that is served at Becca’s restaurant. 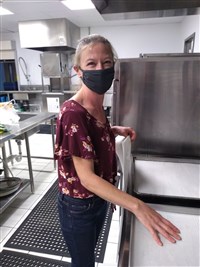 When COVID-19 became a part of daily life, Grace Kitchen continued its ministry by providing take-out meals. And even though participants couldn’t gather around a table, that spirit of community was evident in those who picked up meals for themselves and for neighbors and friends.

Often grace requires human hands to give it substance. It is dispensed every Wednesday afternoon from Grace Kitchen and I am privileged to play a small part in making it happen.

To learn what’s for supper for any upcoming Wednesday, you can find Grace Kitchen on Facebook.

Find the original article published in The Alleghany News here.

*The Conference Communications team wants to share the stories of hope and creativity that are unfolding in United Methodist churches across Western NC. Please email your ministry story to WNCC Communications Director, Melissa McGill, at mmcgill@wnccumc.org.