One part reunion. Two parts encouragement. Throw in a little revival for good measure. That’s how the Western North Carolina Evangelical Movement spent the past three days at the WNCC Annual Conference at Lake Junaluska.

The purpose of the WNCCEM is to provide resourcing and encouragement to pastors and laity who hold to a historic, global, and United Methodist understanding of doctrine, ecclesiology, and ethics.  In addition, this year the group had a slate of recommended delegates for election to General Conference.

The Annual Conference began on Wednesday night with an Ice Cream Rally on the Stuart Auditorium lawn.  Praise and worship led by members of the Hood Seminary House Band, remarks from WNCCEM president Talbot Davis, and the introduction and prayer over the delegates were the highlight of the evening.

On Friday night, the WNCC EM hosted its Annual Dinner at the Lambuth Inn.  More than 150 people jammed themselves into the International Room to hear Chris Ritter, a pastor, author, and thinker from the Illinois Great River Conference.  Ritter spoke on Shouting Calmly Consideredand summarized his message with this memorable line: “Maybe Methodist started shouting each other down when we stopped shouting Jesus up.” According to lay delegate and bible teacher James-Michael Smith:  “[Ritter] was great. Definitely an encouragement and what we needed to hear during this conference.”

On Saturday morning, the WNCCEM joined forces with the Conference chapter of the Wesleyan Covenant Association to host a breakfast featuring Kenneth Levingston from Houston. Levingston told clergy in attendance, “Preachers, no one wants to hear a sermon YOU’RE not excited about.”

Inspired by such words, those in the WNCCEM came down the mountain at the conclusion of Conference eager to put them into practice. 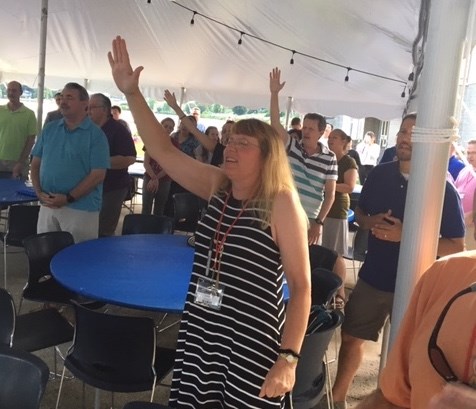