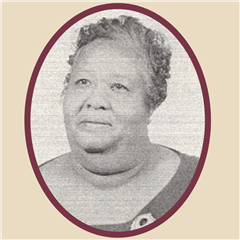 To quote Linda Addo,“‘Miss Jettie,’ as she was affectionately called, became wholly identified with the Woman’s Society of Christian Service. She had served as Secretary of Children’s Work and as Vice-President before becoming President. She became noted for her organizational skills, dynamic speeches, and willingness to go the extra mile. Mrs. Morrison made a special effort to visit all district annual meetings and made sure that many of the district officers and secretaries attended the School of Missions...The women were especially privileged to be led by Mrs. Morrison during the period from 1964 to 1968, for these were years of rapid change...Mrs. Morrison was a member and Secretary of the Inter-Conference Committee on Jurisdictional Affairs. She accomplished much, but she never forgot the fact that what she did was made possible by the women who were working at the local and district levels.” (Linda D. Addo and James H. McCallum, To be faithful to Our Heritage, Second Revised Edition ([Charlotte:] The Commission on Archives and History, The Western North Carolina Conference, 2011), 81-82.)

Following integration in 1968, Mrs. Morrison served on the WNC Conference Commission on Ecumenical Affairs (1968-74) and as a member of the Nominating Committee for the Southeastern Jurisdiction Woman's Society of Christian Service (1968-72).

Rev. Dr. Dolores Queen, the first female to serve as a District Superintendent in the Western NC Conference.