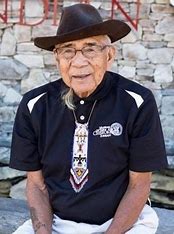 Jeremiah Wolfe was, according to all records, the first Native American to be elected a delegate to General Conference from the Western North Carolina Conference when he served as a delegate in 1976. A native of Cherokee, he was a quiet and strong force for his people and their rich culture and heritage. As long as he was able, he opened the worship each Sunday at Cherokee UMC with a wonderful and heart-felt prayer in his native language. Jerry was an active leader in his church, serving at various times as Lay Leader, Lay Delegate to Annual Conference, and Council Chair. He also served as a member of the WNC Conference’s Commission on Religion and Race from 1972-80.

While he was sent to an “Indian School” at age seven where his native culture was repressed, Jerry quietly obeyed, all the while making sure that he never forgot his roots. As the Rev. John Ferree said, “Jerry was one of those who had every opportunity to be bitter about the treatment of his people, but he made the choice to do something different. He did not want to poison the minds of the next generation.” Instead, he became an advocate for the preservation and the cultivation of the Cherokee language and culture, to the point where Western Carolina University awarded him an honorary Doctor of Humane Letters in 2017 for his efforts.

Jerry Wolfe was a mason by trade and was one of the last of the Cherokee stonecutters. He served in the US Navy during World War II and was a D-Day survivor. While the only Native American in his unit, he had the respect of everyone in his unit. In the spring of 2013, Jerry was named Beloved Man of the Eastern Band of the Cherokee Indians – the first man to receive this honor in over 200 years. In the spring of 2017 was bestowed with the Order of the Long Leaf Pine.

Rev. David Ortigoza, the Director of Hispanic and Latino Ministries for the SEJ in 2003.

Rev. Diana Wingeier-Rayo, the first Hispanic/Latina woman to be received into full clergy membership in the WNC Conference.