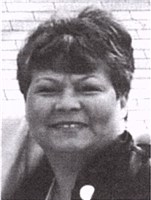 Daphine Strickland was part of the Task Force that led to the organization of Triad Native American Church, the first Native American congregation in our Conference outside of Cherokee. She is a Charter Member of that congregation, where she teaches a Young Adult class and is a Lay Speaker. She has served as a 10-10-10 Missioner for the General Board if Global Ministries 2001-03.

Daphine has served as an Associate District Lay Leader of the Greensboro District 2004-07. At the Conference level she has served on the Committee on Native American Ministries 1996-2004 and 2009-16 (Chair 2000-04 and Secretary 2009-12), the Conference Ministries Advisory Council 2000-04 and 2008-09, Committee on Episcopacy 2004-12, Committee on Nominations 2004-12, Justice and Reconciliation Team 2016-20. Daphine was a Lay Delegate to Jurisdictional Conference in 2004 and 2008, and a reserve delegate in 2012. She served on the SEJ Commission on Archives and History 2000-08. She has also served as Chair of the Southeastern Regional Native American Caucus and is very active in SEJANAM (Southeastern Jurisdictional Association for Native American Ministries).

To quote her biographical sketch, “A graduate of Guilford College, Strickland possesses a bachelor’s degree in Women’s Studies and Justice and Policy, with a concentration in African-American studies. She is a Public Speaker and Storyteller; she speaks about Native Americans and their culture through lectures and storytelling. In addition to Native American stories and legends, she also tells stories of African-American history.” She is of the Lumbee/Tuscarora tribe.

Daphine Strickland states that her goal is “to empower people to speak for themselves and to help each other. She believes we must work to educate all people about the environment—how people, animals, and the earth all need each other to survive.”

Thomas Queen, the Director of the Cherokee Mission from 1973 until his death in 1992.

Jeremiah Wolfe, the first Native American to be elected a delegate to General Conference from the WNCC in 1976.

Rev. David Ortigoza, the Director of Hispanic and Latino Ministries for the SEJ in 2003.

Rev. Diana Wingeier-Rayo, the first Hispanic/Latina woman to be received into full clergy membership in the WNC Conference.