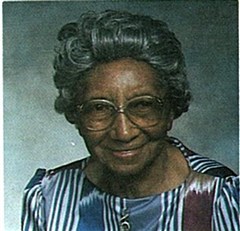 The Rev. East made her profession of faith at a very early age at Lovell’s Chapel Methodist Church in Pilot Mountain.  At the age of ten she taught her first Sunday School Class.  She organized and was President for five years of the Methodist Men’s Club at her home church, where she also served as Lay Leader for ten years.  The Rev. East was licensed to preach in 1958, ordained Deacon in 1960, and ordained Elder in 1964.  As a Local Pastor, she served Piney Grove (Walkertown) 1963-69, Elkin-Jonesville Charge 1970-71, and Ramseur Circuit 1972-81.  She retired in 1981.

In retirement the Rev. East managed the senior citizens' lunch program, was a member of the Yadkin Valley Development District, Inc., and the Retired Senior Volunteer Program; served as a pollster with the Surry County Board of Elections; and volunteered with the Surry County Department of Social Services and the Surry County Schools.  She was also active in her home church, Lovell’s Chapel UMC, in Pilot Mountain.  The Rev. East is featured in the book, Hope and Dignity: Older Black Women of the South, written by Emily H. Wilson.