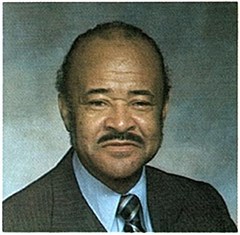 ​The Rev. Dr. J. C. Peters was the first African-American to serve as a District Superintendent in the Western North Carolina Conference, overseeing the Winston-Salem/Forsyth District from 1968-74.  “Pete” was a graduate of Rust College and Gammon Theological Seminary.  Rust College later honored him with the Doctor of Divinity degree in 1969.    Originally a clergy member of the Upper Mississippi Conference, he served as a pastor in North Carrollton, Eupora, and Columbus from 1950-62.  From there he served as Executive Director of Gulfside Assembly in Waveland, MS from 1962-66. In 1966, “Pete” transferred to the North Carolina-Virginia Conference, and was appointed to Saint Matthew's in Greensboro.  Following his tenure as a District Superintendent, he served as Associate Director of the Conference Council on Ministries from 1974-79, then as Vice-President of the United Methodist Publishing House from 1979-88.  “Pete” transferred his membership to the Tennessee Conference in 1986.  Following his years with the Publishing House, he served as the founding pastor of the Ernest Newman UMC in Nashville, where he served from 1988-93, from which he retired.

The Rev. Dr. Peters also holds the distinction of being the first African-American to head the clergy delegation from the WNC Conference to General Conference, doing so in 1972.  He was subsequently elected to the conference’s General Conference Delegation in 1976 and 1984 and as an alternate in 1980.

Mr. Clarence Winchester, a leader in the North Carolina Conference (Central Jurisdiction) and in the WNC Conference.