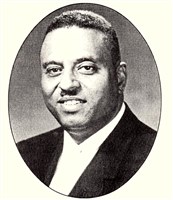 Bishop L. Scott Allen was the first (and to date, the only) African-American to serve as Bishop of the Western North Carolina Conference, serving as our Bishop from 1976-84.  He was the last person elected to the Episcopacy in the Central Jurisdiction (on August 18, 1967) and was the first African-American to serve as a Bishop in the Southeastern Jurisdiction (beginning in 1968).  Bishop Allen was a graduate of Clark University, Gammon Theological Seminary, and Northwestern University.  Prior to his election to the episcopacy, he served as a pastor in Atlanta, Covington, Fairburn, and Savannah (from 1939-49), then served as Editor of the Central Christian Advocate from 1949-67.

Bishop Allen was also a student of the Discipline and church law.  When he needed to provide a ruling on a matter, he did so matter-of-factly.

As Bishop Lawrence McCleskey said at Bishop Allen’s memorial service: “He modeled for us consistency, fairness, and reliability in the Episcopal office.  You could count on what he told you. . . . His integrity was above reproach.  His self-assurance was exemplary.  His consistency was unwavering.”

Bishop McCleskey sums up the significance of Bishop Allen’s ministry when he said: “He had witnessed the end of legal segregation in America.  He had been involved in the structural end of racial segregation in this church he loved.  And he had been observer, participant, and spiritual and temporal leader in urging and guiding the UMC to live into what we had declared ourselves to be in structure.”

The Rev. J. C. Peters (July 10, 1925- July 2, 1998), the first African-American to serve as a District Superintendent in the Western North Carolina Conference, overseeing the Winston-Salem/Forsyth District from 1968-74.

Mr. Clarence Winchester, a leader in the North Carolina Conference (Central Jurisdiction) and in the WNC Conference.