Awakening Hope: Praying the Daily Office in a Psychiatric Hospital

Names and identifying details have been changed to protect patient privacy.

Like so many others, the first surge of COVID-19 broke me into pieces. Early on I was working from home, unable to fully engage with the people I cared for at a nearby state psychiatric hospital. Some of them got sick. Some of them died, alone. Evan. Alice. Martin. And more. Gone. When I called patients for telehealth appointments, I tried to keep leaning on the same pastoral care skills I had been honing for a little while by then. But I was teetering on the edge of hopelessness, immobilized by the reality that some people live hard, painful, short lives, and after all of it, they die alone.

For nearly three years I have worked at this psychiatric hospital. As a chaplain to folks with severe mental illnesses, usually incarcerated or involuntarily committed, I have come to believe that pastoral care, as with creative processes such as writing, unfolds as you do it. You sit down to write in your journal or work on an article, and you find yourself writing things you didn’t know were inside you. Likewise, you sit down with people in your care—juice or Uno cards or crayons in hand—and you encounter yourself and another in ways you couldn’t predict.

Social work, community activism, pastoral care, or just paying attention brings many Christians to ask, in the face of exceedingly difficult or hopeless situations, “What meaningful hope could possibly unfold from this?” A fully satisfying answer to that question is hard to come by. But, in my practice of praying the Daily Office with patients in my care, something at least adjacent to an answer has emerged for me. To be honest, I would not have predicted this.

Some Episcopalians love the Book of Common Prayer as such. I imagine these saints faithfully pray Morning, Noon, and Evening Prayer plus Compline every single day without fail, probably while drinking very pious non-caffeinated tea. They chuckle sensibly and never curse. Meanwhile, I routinely spend half an hour resisting the fifteen minutes it takes to pray Evening Prayer. Sometimes I have to chant to myself: “Fake it till you make it.” I trust that, if I press on against my own resistance, regular prayer will help form me into the kind of Christian that God wants me to be. And sure, in theory, I don’t have to pray the Daily Office. But it’s there, it’s ours, and I really can’t be trusted to pray without a guide. (Otherwise, I won’t be praying at all.)

My introduction of the Daily Office to the psych hospital is similarly lacking in piety. First and foremost, I started using the Daily Office at the several worship services I co-lead because I was anxious and tired. I was in my final year of seminary, chipping away at my thesis and coursework in between shifts. I was a little too frazzled to handle the burden of liturgical creativity and often felt too grouchy to come up with a good sermon. In light of that, I figured that the Daily Office and the lectionary readings could say things a lot better than I could. And maybe the patients who attended the services might come to like the consistency of the BCP. Plus, it would only take me a few minutes to put the service together in bulletin form and pick out some songs for my co-leaders to play on the guitar—leaving me more time to chat with patients, stay up to date on clinical notes, and annoy my fellow chaplains.

It seemed to go relatively well. The several months pre-COVID when we were using the Daily Office, with lots of time for singing and an extended period for sharing thanksgivings and intercessory prayers, produced humorous and poignant anecdotes that I suspect I will enjoy remembering for a long time after I move on from this place.

One woman, who we’ll call Melissa, was inspired to write her own prayers because while she said she liked the collects in the daily offices, she also wanted to pray more specifically for mental health patients. Melissa hand-wrote about twenty or so and gave me a copy. Several reflected the insight that can only come from prolonged personal experience, such as this one: “For all who have painful or fearful memories, and for those who experience moods that are unpleasant or hard to bear, that God will help them, and heal broken hearts. Lord, have mercy.” Or these two:

“For landladies and landlords and real estate agents and bankers, that God will allow none of them to oppress those of a mental illness background. Lord have mercy.”

“For police to handle mental illness cases in a godly and faithful and honest manner, also without fear. Lord have mercy.”

Melissa also included what she titled a “collect against social workers,” which may or may not have had anything to do with the hospital social worker with whom she was in an open conflict. I struggled to keep track of the details of this conflict, which included a cell phone, a missing can opener and diverted disability checks. The collect perhaps should not be repeated verbatim, though I can say that it strongly emphasized God’s severe judgment upon certain social workers who have sticky fingers with can openers and are negligent with disability checks.

I recall a man, Peter, who faithfully attended a Thursday service that took place in the late afternoon in the dayroom on his floor. He was consistent: always sat to my right, and his intercession was always for his son and “for freedom.” He was confident, too, about his own narrative.

One afternoon another patient shared during the intercessory prayer time that he was terrified by what his schizophrenia was causing him to see and hear. Peter listened quietly, nodding. When the other man was done, Peter told a story of how, before coming to the hospital, he once spent an entire night tormented by disturbing voices and visions. “I had to distract myself, so I bit down hard on my finger. Eventually, I bit it off.” He unfolded his hands to reveal that half of one of his fingers was, indeed, gone. I had never noticed that before. The other man looked at the nub for a while, nodded, and sat back peacefully in his molded plastic chair.

Peter almost always volunteered to read the collects. I looked forward to hearing him pray the “Collect for the Presence of Christ,” which is often reserved for Thursday Evening Prayer: “Lord Jesus, stay with us, for evening is at hand and the day is past; be our companion in the way, kindle our hearts, and awaken hope, that we may know you as you are revealed in Scripture and the breaking of bread. Grant this for the sake of your love. Amen.” He prayed with a pleasant cadence and a rich, deep voice, and sometimes the echo of his prayer followed me on the drive home.

Then COVID hit. When the first patient, someone I had known well, died, I wept on my kitchen floor. I thought about Peter praying. I could not pray with my own voice then. I had to recall the voice of someone who had suffered such that biting off his own finger was, comparatively, a relief, and who could still say in that beautiful cadence, “Lord Jesus, stay with us … awaken hope.” I got off the floor. I called some of my patients.

The pandemic continues to unfold. Since we still cannot safely gather at the hospital, our regular practice of praying the Daily Office remains paused. Yet the material that accumulated from those months of prayer seems to have opened itself up to me. Hopelessness, struggle, and pain did not appear with COVID. They were around long before and will remain long after this particular saga ends. Melissa and Peter, and others who prayed with us, were already living lives that were difficult beyond what many of us would think to imagine. And yet, Melissa played in the rhythm of collects to create and share new ways to pray for herself and others. And Peter graciously responded to his fellow’s pained intercession with his own story of costly endurance through suffering. When I could not pray myself, I was able to pray in his voice instead. It was as if our praying the Daily Office together was a means by which we practiced stringing the pieces of our lives together. We brought structured and open, intercessory prayer to bear upon each other and our own stories—more succinctly, praying helped us make meaning together.

Meaningful hope, perhaps, does not unfold from exceedingly difficult or hopeless circumstances. It may be that meaningful hope is awakened within these circumstances. Repeatedly praying the Daily Office, as I have practiced in the psych hospital and hope to continue soon, has led me to believe that in our commitment to this and similar disciplines God helps us make meaning. As our lives continue to unfold, I think it is this active process of meaning-making that begets the hope which sustains us as we seek the face of God and, perhaps, an answer. 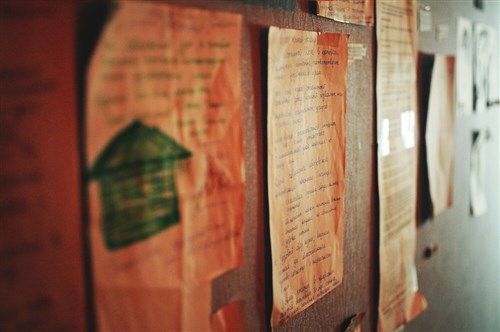