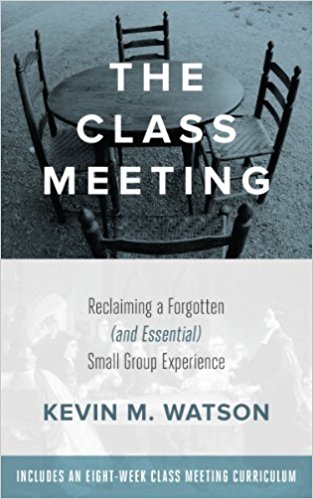 Dr. Kevin Watson has written a fresh new guide to the theory and practice of the Wesley class meeting, an essential element of truly Wesleyan spirituality. This book is for clergy and congregations who are looking for ways to develop deeper discipleship. The class meeting is made workable without losing its essential dynamic as a gospel-based accountable community. Watson has resurrected the class meeting and given it new meaning, showing its relevance for the church today and how it may be a perfect means for church renewal.

Since his compelling book on Wesley’s class meeting came out in 2013, Kevin Watson’s book has been the talk of Methodism and rightly so. Watson traces the history of the class meeting, the reasons Wesley wanted small groups to be a part of the movement and the particularities of why they were so successful. In a time when almost every church has something they call “small group ministry,” John Wesley’s ideas greatly influenced the modern notion of small groups. The early class meetings were not informational or curriculum driven groups like the Sunday School of the 20th century, but were a community where people answered the historic question: “How is it with your soul?” Watson’s translation into modern English is helpful: “How is your life with God?” The class meeting had around seven to twelve people often with both men and women together and they sought to keep the General Rules: Do no harm, do good and attend upon the ordinances of God.

Perhaps the most meaningful part of Watson’s book is that he designed it to be used as an eight-week study that “gradually shifts from an informational study about the class meeting to a class meeting itself.” It’s a starting point for people to launch their own small group in the form of a class meeting. Every chapter offers a guide for small group discussion and detailed help organizing conversation. While small groups with true depth like the class meeting can be daunting to both leaders and participants, Watson is right in how to guarantee that your class meeting will fail: never start one. The Class Meeting shows us, if nothing else, that the traditions of the church are still alive and well today, that people still long for community and that real community takes place in the midst of real vulnerability and covenant discipleship.

find it on amazon.com here.