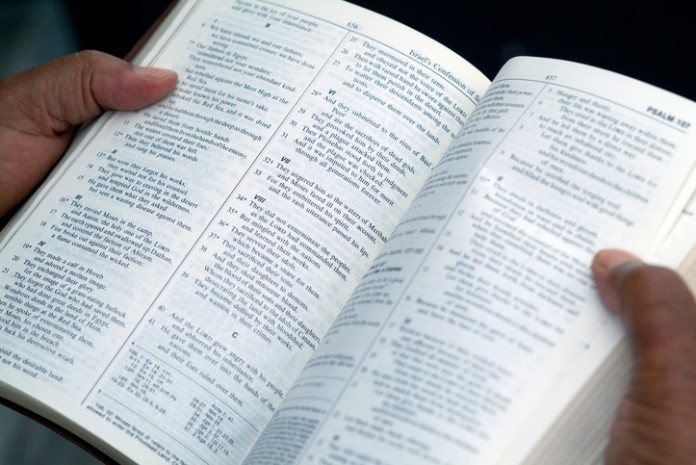 I’ve never really been a lectionary preacher. That particular statement may cause disdain when read by some of my mainline church colleagues, and perhaps an equal measure of applause from my more evangelical friends who prefer to preach in sermon series. It’s not that I dislike the Revised Common Lectionary or think it’s inferior to putting a series together; it’s just that I like the depth that a sermon series can go into on a particular biblical book or topic.

Then again, the preacher who deals exclusively with series also has a potential dilemma. If we’re honest, we’d probably admit that we tend to do series on those books and topics that are in our homiletical wheelhouse. Most of us have about three sermons that we tend to write, regardless of the text or topic, and we tend to gravitate toward series that let us work to our strengths. The lectionary, on the other hand, forces the preacher to go into territory he or she might more readily avoid.

And then there’s the dilemma of running out of ideas for a year’s worth of sermon series. That hardly seems possible, but I have found myself there on occasion. I’m there now, actually. This summer, I’m preaching a series on the minor prophets, which is stimulating (and certainly dives into biblical territory that is often uncharted from the pulpit) but what’s next? It’s in those moments that I’m tempted to use the Revised Common Lectionary, but I hesitate because it seems to jump around a little more than I’d like.

I recently discovered a third option, however, that combines the steadiness of the Lectionary with the depth of a sermon series. It’s called the Narrative Lectionaryand it’s designed to take the preacher and congregation on an in-depth journey through the whole Bible over a four year cycle. Created by some folks at Luther Seminary, the Narrative Lectionary offers a great option for preachers who want to increase the biblical literacy of their people and make the story of Scripture a foundational part of their lives.

The Narrative Lectionary cycle actually begins the Sunday after Labor Day, thus fitting the beginning of the practical Christian year in most churches. From that Sunday until the first Sunday of Advent, the Narrative Lectionary journeys through a survey of the Old Testament, using texts that outline the arc of the story. Each fall, over the course of four years, you will have given your congregation a consistent grounding in the foundational story of the Hebrew Bible, using different OT texts each year.

From Advent to Easter, the Narrative Lectionary then takes the pastor and congregation through one of the four Gospels. After four years, you will have preached through each Gospel in depth, demonstrating again how the OT story you presented in the fall finds its fulfillment in Jesus. You will also have built a rhythm of hearing the Gospel story during the most critical seasons of the church year. From Easter to Pentecost, the Lectionary turns to the book of Acts and the letters of Paul, thus bringing the church into the story (again, different texts selected for each year). After Pentecost, the Narrative Lectionary gives you the option of diving into other pieces of biblical literature in depth with summer series on things like the Psalms, the prophets, wisdom literature, apocalyptic books, and the like.

I love this because it gives the preacher a way of teaching from the whole Bible every year as well as providing people with an annual plan to read and study along with you. It’s a way of providing context in a culture where most people, including most church people, have only read and heard the Bible preached in truncated pieces and chunks.

I once did a year long series of preaching through the Bible, using Ellsworth Kalas’The Grand Sweep as an outline, but I found that it moved really fast to do it in a single year. The Narrative Lectionary gives the preacher and congregation time to really become immersed in the Bible together as a rhythm of life together over four years.

I’m looking forward to jumping on this Lectionary series in the fall. Perhaps you are already working with it. If so, I’d love to hear from you in the comment section below (or shoot me an email at preachingcollective@seedbed.com).

If you’re interested in learning more, check out the Narrative Lectionary resource page and download the plan.

Whatever route you choose for your preaching this coming year, may it be fruitful!

Click here to see this article as originally published.