There were protests in major American cities and reprehensible acts of violence that tore fresh holes in the nation’s already tattered fabric.

The presidential campaign continued, with its escalating absurdities. The SEJ episcopal elections concluded, though the consequent re-shufflings are yet to come.

In France, a festive night of holiday celebration was horribly demolished by yet another act of incomprehensible terror, and just the latest in a series of atrocities that until recently pundits might still have described as “unimaginable.” No longer.

And everywhere, it seemed, like killer amoeba, Pokemon Go ate the brains of millions and caused actual pain, suffering and mayhem. Lawsuits are sure to follow.

And through it all…

In Cambridge (England, not MA), I prayed in the mornings, read St. Paul through the mid-days, walked most afternoons through soft English rains, and sipped hot tea (Earl Grey, with cream, no sugar) to the comfort of body and soul. One Friday, at Fitzbillies, as King’s College graduates processed in their fur-lined academic hoods, I went so far as to eat a sausage roll and Chelsey Bun!

Yes, the world is staggering, lurching, spinning almost out of control. 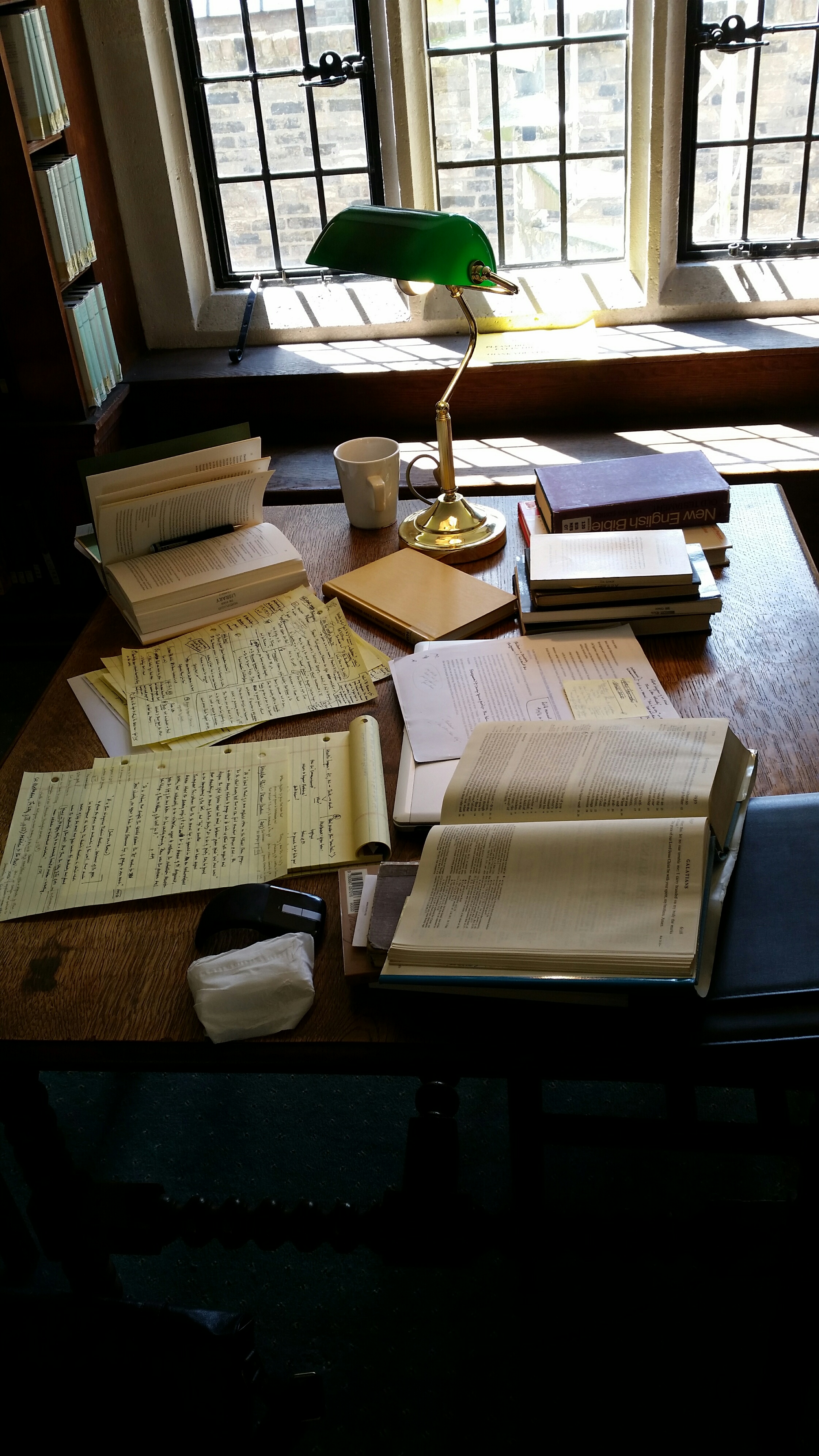 But in the midst of the chaos and craziness I am at peace. And prayer. And serene study. The skinny: for the first time in my ministry I am on sabbatical. In residence at Wesley House, on Jesus Lane, far away, geographically and otherwise, from Hawthorne Lane—the church in Charlotte where, by the grace and mercy of God, I serve as Sr. Pastor.

And I could feel guilty about it, I guess. After all, back home—and quite apart from the violence and turmoil—there is a heat wave and the helter-skelter of summer days and ministry: VBS, Music Camp, fall planning. There is the usual syllabus of surgeries, pastoral cares and “summer slump” budget-worries.

All along the Metro District watchtowers there are conversations a’plenty about what kind of bishop Paul Leeland will prove to be and what his brief tenure may mean for these or those; and the announcement of his appointment, and his “moving day,” only an order of magnitude removed from the many other pastoral relocations announced in June.

But I am apart from all of that. By arrangement with Westcott House, an Anglican seminary across Jesus Lane from Wesley House, I pray with priests. After prayer I have the library to myself (which at Westcott is less like a warehouse with metal shelves full of books and fluorescent lighting than it is a large paneled living room, warm and comfortable). In the library, in what amounts to Trappist silence, I am rereading St. Paul—Philippians and Philemon. 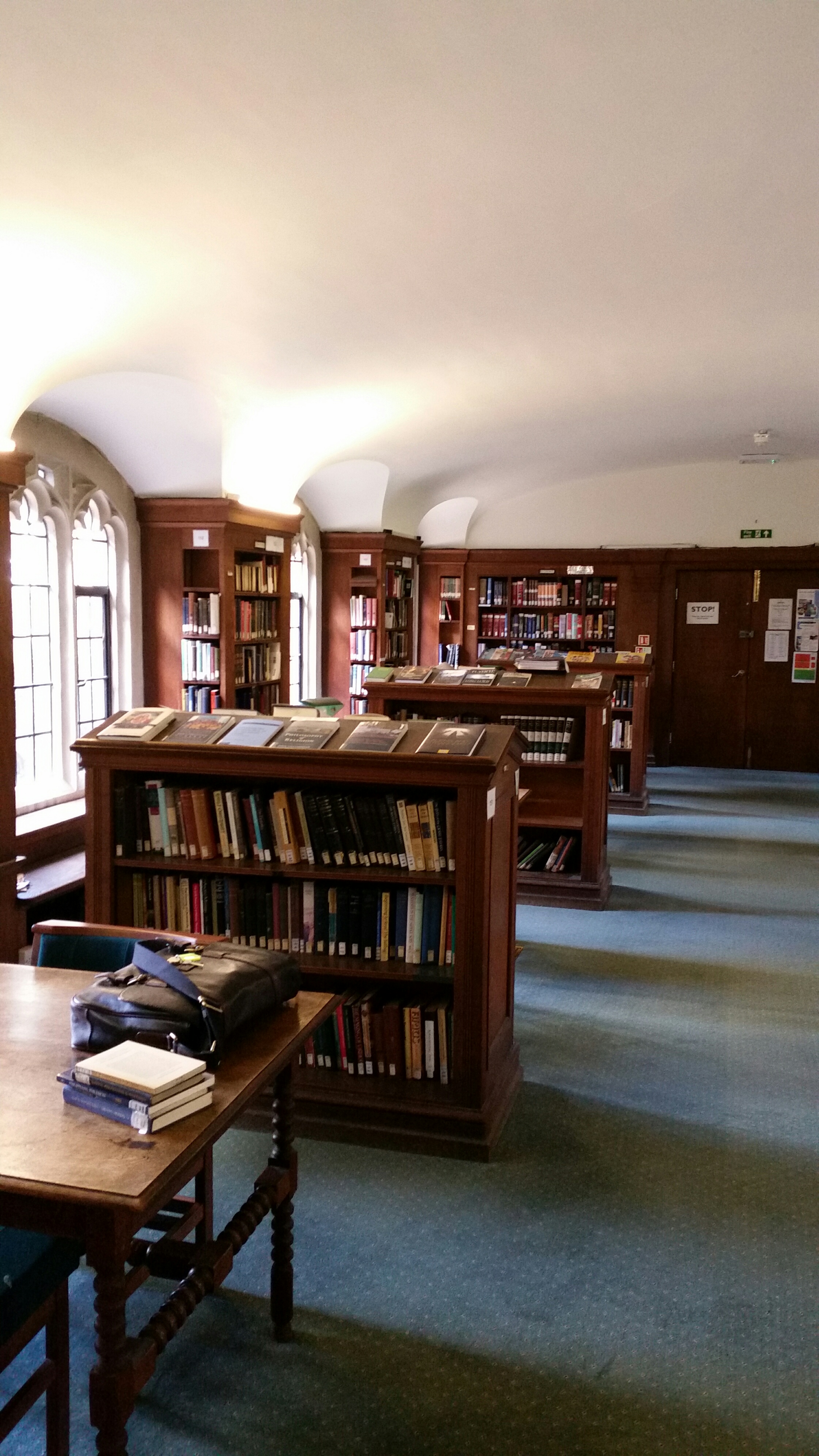 Which is to say, I am away from the business of the church and the Church. Away, too, from TV and the news cycle (though I do check the headlines on my computer each day, and Twitter informed me, real time, of the election results at Junaluska). But across the Pond, as it were, I am quite a ways from the “world” as I most often know it. And if in my head I know that none of us are ever very far from the increasingly unpredictable reach of terror’s madness, I nonetheless feel as if I am “in the world but not of the world”: off the grid, so to speak, and thankful to be so.

I am so thankful to my congregation for enthusiastically granting me this season for refreshment and renewal. I am just as thankful to my former District Superintendent who, when I told her I needed some time away for rest and re-centering, wrote a letter on my behalf to my already supportive SPRC and Church Council.

And I must say I am also thankful for The United Methodist Book of Discipline. Now, I am painfully aware that back home the Book of Discipline has become a flashpoint, with conferences and bishops and clergy debating, dissenting from and defending certain paragraphs. I do get all that, which is why my intercessions each morning have included our Church, our bishops (and particularly the new ones suddenly up to their necks in these troubled waters), and all our clergy and people (who might hope that, as at Bethesda, these “troubled waters” are angel-stirred and portend healing).

Be any of that as it may, for my part I am grateful for those portions of the Discipline—specifically, Paragraphs 351.1, 2, 3—that grant tired pastors the time needed for refreshment and renewal. It occurs to me that whoever crafted those passages (and whoever before the crafting had the actual idea to include such provisions) must have known that many United Methodist preachers, and I not least among them, proclaim Paul but practice Pelagius.

In sum, as a general rule we do preach God’s grace. The sad and exhausting irony, however, is that we go about our duties as if we and our congregations are saved by our works. By hard work alone, in fact. Which is why pastors seem particularly prone to and guilty of what Brene Brown, in The Gift of Imperfection, identifies as a prevailing cultural idolatry: “exhaustion as a status symbol and performance as self-worth.”

No surprise then when self-care is not a high priority among us. “Sabbath” is indeed an interesting theological concept, and even a source for sermonizing; but for most pastors “Sabbath” is more doctrine than actual practice, more interpretive crux than existential reality. An aspiration, at most.

And maybe not even that. Poignantly, some of us may be afraid to take time off or away, whether for fear that people will not be able to function without us or for fear that they might discover they can.

I am so Pelagian that back when I first began to consider the idea of a sabbatical, I felt guilty at the thought of taking an extended break from my work-a-day duties. I was uneasy about continuing to draw my regular salary while I did “no (regular) work.” (And more than once I thought about Scrooge’s rant to Bob Cratchett on Christmas Eve.)

But I got over it, and not least because I remembered how Jesus would withdraw from the crowds to pray, so as to return to them more able to heal, feed, and preach. I recalled, too, how Thomas Merton once said something to the effect that “When I am alone, that is when I learn how to love others.”

Merton also said, “Happiness is not a matter of intensity but of balance, order, rhythm and harmony.” And that is the point, the goal and hope of my sabbatical: to rebalance, reorder, reconnect, and not least so that I do not myself stagger and lurch with every new report of things. So that when I return, I will have a non-anxious and balanced view from “above the trenches”—a somewhat greater perspective than we are sometimes afforded in the midst of daily stuff.

I have long known that at any given moment I am responsible for, and a steward of, at least six sets of stories: six separate but simultaneously overlapping narratives, and each of them with many layers: the Gospel and its claims; the Church and its missions; the World and its needs; my congregation and its administrative demands; the life-stories of our various members in the midst of their journeys; plus my own story, self and family. Tending all of those stories at once frazzles and frays, and all the more when we do not step-back now and then.

If, as Bishop Willimon has often observed, pastors can become quivering masses of availability, he is right to conclude that pastors who are always available bring nothing with them when they come. I’m hip. Put another way: if a pastor’s personal lamp is burning low, s/he has no real light to offer the church or the world or others.

A few months ago I came to realize my lamp was almost out of oil. And I could no longer deny the urgent, undeniable summons to be unavailable, that in order to rest: not just to sleep later on a given morning or three, but to calm and re-center my heart for a while: to refocus my mind and soul.

In order to be and bring my best—more to the point: to be a fresh channel of God’s blessing and an ensign of God’s presence—I myself needed “renewal,” the deep replenishment of my spirit by way of intentional time in the presence of God. I came to believe that a disciplined time “away” would bring me “back,” and back to basics. Bottom line, that reclaiming who I am by remembering who God is, and by renewing my vows by remembering how God long-ago claimed me, I could both deepen my love for God and enrich my love for those I am charged to serve. Thanking God more often than Morning Prayer, aware as I am that not everyone has such an opportunity. Begging God to let this time have its full effect in me. Which is why I interpret this time away as a season of extended worship.

So, I am on sabbatical—a word whose root, after all, is “sabbath.”

I have left, in order to return. I am tending my lamp: trimming the wick, buying fresh oil, awaiting the Groom. It is my hope and prayer that my own rekindled faith and spirit will bring fresh light to the congregation I love, will warm the hearts and minds of those I serve when, by God’s grace and mercy, I come back home.