How to Win a National Championship

Was Villanova’s Kris Jenkins lucky in hitting the winning shot in the NCAA men’s basketball championship game? Or was that moment the culmination of years of practice, study and teamwork? 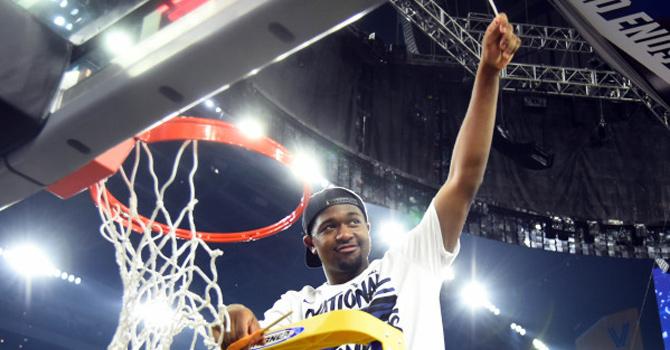 For 4.7 seconds on April 4, University of North Carolina men’s basketball fans thought they might win the NCAA national championship.

Off balance and way outside the 3-point line, Tar Heel Marcus Paige had just hit a shot to tie the game.

But then Villanova inbounded the ball, and Kris Jenkins launched his own 3-pointer as time ran out. Nothing but net.

It was a devastating loss for Carolina fans, who whipsawed between pure elation and stunning defeat in a matter of seconds. Yet before being able to process their own emotions, Carolina fans who are parents had to step up and guide their children through the loss.

My 10-year-old daughter wanted to know, “Why did Jenkins have to be so lucky?”

She just wanted me to console her, and likely bad-mouth the winning team or the referees, to validate her feelings of disappointment.

But Jenkins’ shot had nothing to do with luck. Nothing.

Jenkins’ birth mother played college basketball and later went on to coach. She taught him to play from a young age. When their family circumstances became more than she could handle, she asked another family they knew through basketball to care for Kris and become his guardians. In his new family, he played competitive basketball with his siblings, including Nate Britt of UNC, whom he played against in the national championship game.

And yet so much of basketball is about improvisation -- all the practice and observation and study and teamwork play out in the particularity of 40 minutes of one game on one court.

It sounds a lot like ministerial leadership. You use what you know from your education and training. You depend on the wisdom and stories of your tradition. You find mentors and colleagues. And you improvise according to the guidance of the Holy Spirit.

In a previous career, I spent eight years as a retirement community chaplain. I was called to the bedside of a dying elderly person several times a week. No matter how many hours I had shared with that person, I never knew exactly what I would find. Would there be family present? Would the death be gruesome or peaceful? Is it really time, or does the patient still have a while?

Even though I took pastoral care classes and taught others how to do what I did, I was never fully prepared for a death. Each one was as different as the person in the bed. Different families, illnesses, final wishes, sounds, smells. The best I could do was rely on my training and experience and trust that the Holy Spirit would guide me as I led the family through the rest. With each death, I had to improvise.

New colleagues shadowing me at the time of death would ask, “How did you know that was the right thing to do? Has that ever happened before?” My answer was always the same: “No, it has never happened that exact way before. You won’t need to copy what I do; you’ll respond in your own authentic way. I did what I did because there are a few underlying themes that are always the same, and I improvise the rest.”

So what is the lesson to teach our kids as they drift off to sleep with tears in their eyes because they feel that their beloved Tar Heels unjustly lost the game? Is it just a game? Will it be better in the morning? Is it best simply to distract them with a story with a happier ending?

My daughter liked my answer -- that it had nothing to do with luck -- about as much as I do. Sometimes we get to shoot first, and sometimes we get to shoot last. Both Paige and Jenkins trained as hard as they could. They sacrificed, studied and practiced to get to the top of their game. But just because you trained for years and just because you tried your best, that doesn’t guarantee a win every time. Life is hard.

To their teams, they are both heroes. At the same time, one left the court a national champion, and the other returned to the locker room gutted and disappointed.

Into that locker room walked Michael Jordan. He was the first to address the team, and Paige didn’t recognize his voice at first.

“But I look up and see the greatest player that ever played basketball assuring us and saying it’s OK, that he’s proud of us, that we made him proud to be a Tar Heel and be a Tar Heel alum, that you can’t be a great winner without having to experience struggles and losses, and how to use this as fuel,” Paige said.

Jordan was a leader in that moment, and he improvised. He reminded the team of the themes common to being a Tar Heel. He told them he was proud of them. He told them it would be OK. He told them that life happens. And he assured them they would be better prepared for their next challenge.

That is a message parents of distraught Tar Heel children can pass on. The best you can do is show up prepared, be present in the moment as if it is the most important moment of your life, and pray that the Holy Spirit will guide you through the rest.