Souls in Transition: The Religious and Spiritual Lives of Emerging Adults

by Christian Smith, Patricia Snell
Many congregations lament the loss of those between the ages of eighteen and twenty-three in their congregations. Sociologist of Religion Christian Smith and Professor Patricia Snell engaged in five years of research that followed teenagers into young adulthood or as they say emerging adults (EAs). Their seminal work explores and explains EAs, the cultural impacts on them, and their resultant perspectives on spirituality, religion, and congregational life. A variety of issues and questions are discussed, including social media, alcohol, depression, college, drugs, dating, and death. A variety of religious groups, such as Protestants, Evangelical Protestants, Roman Catholicism, Judaism, and Islam, are all part of the conversation. There is ample information in this accessible and well-researched book to help congregations from a variety of traditions understand and minister to this segment of EAs. The book also includes charts and graphs, and offers extensive notes, resources, and a detailed index. 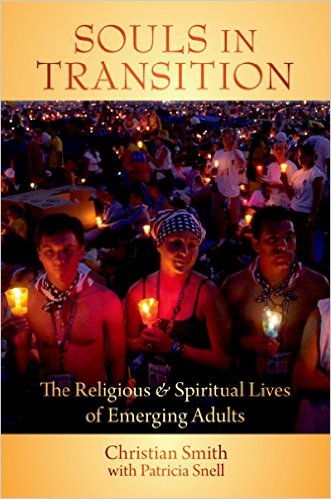 How important is religion for young people in America today? What are the major influences on their developing spiritual lives? How do their religious beliefs and practices change as young people enter into adulthood?

Christian Smith's Souls in Transition explores these questions and many others as it tells the definitive story of the religious and spiritual lives of emerging adults, ages 18 to 24, in the U.S. today. This is the much-anticipated follow-up study to the landmark book, Soul Searching: The Religious and Spiritual Lives of American Teenagers. Based on candid interviews with thousands of young people tracked over a five-year period, Souls in Transition reveals how the religious practices of the teenagers portrayed inSoul Searching have been strengthened, challenged, and often changed as they have moved into adulthood. The book vividly describes as well the broader cultural world of today's emerging adults, how that culture shapes their religious outlooks, and what the consequences are for religious faith and practice in America more generally. Some of Smith's findings are surprising. Parents turn out to be the single most important influence on the religious outcomes in the lives of young adults. On the other hand, teenage participation in evangelization missions and youth groups does not predict a high level of religiosity just a few years later. Moreover, the common wisdom that religiosity declines sharply during the young adult years is shown to be greatly exaggerated.

Painstakingly researched and filled with remarkable findings, Souls in Transition will be essential reading for youth ministers, pastors, parents, teachers and students at church-related schools, and anyone who wishes to know how religious practice is affected by the transition into adulthood in America today.
Find it on amazon.com here.