The Pastor as Newcomer by Roy Oswald 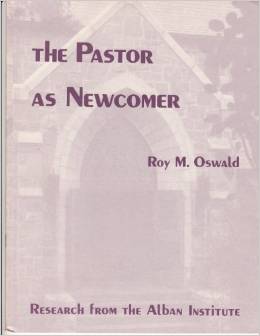 All too often when a pastor takes up a new assignment or call the same frustrating series of events occurs: ...everyone experiences a burst of enthusiasm and hope, with Lay people and clergy finding that doors seem to open to new possibilities...a few things go wrong, some hopes get dashed, personal differences emerge, old feuds erupt again, and a kind of disillusionment begins to take over...gradually things get back to where they were, or worse, and the new pastor begins to have daydreams of greener pastures elsewhere.

It is our conviction that more creative use of those early months of starting up a pastorate will lead to more effective collaboration between clergy and laity. That conviction has been reinforced during the two years of our explorations but perhaps a more important conviction has also been rediscovered and reaffirmed:  that pastors and lay people have enormous resources of knowledge and experience to draw upon and that they can generate important knowledge for others by reflecting on that experience.

In this monograph, Roy Oswald has brought together many of these important learnings out of the life and commitment of clergy and lay people who were willing to look critically at themselves and their work and to share what they saw.

Find it on Amazon HERE.