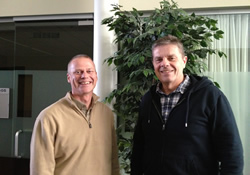 If you want to become a member at Cornerstone Church: A United Methodist Congregation, you will be asked to discover your ministry niche while getting to know the church.

A monthly "discovery" class at the Grand Rapids, Mich., area church helps people learn their personality type, spiritual gifts and passions. An appointment with a coach then helps prospective members decide which ministries are right for them. It is all part of a three-class membership process.

"Lay people are expected to serve in some capacity," said the Rev. Bradley P. Kalajainen, lead pastor. The intent is to energize, not stress.

"We have had an expression since the church began: do one thing and do it well," Kalajainen explained. "We give people permission to say "no" to too many things."

Laity seem to have heeded that message throughout Cornerstone's 23-year history. The church has grown from an average attendance of 350 to 2,500 worshipping at two sites, one of which opened last October.

Approximately half of the attendees serve in a weekly or biweekly capacity, Kalajainen said, alongside a staff of about 40. That includes Kalajainen, a teaching pastor and an executive director. A layperson who works for a large furniture manufacturer leads the newest campus while pursuing ordination.

"The reason for Cornerstone's growth to becoming the largest United Methodist church in Michigan is directly linked to the role of the laity," Kalajainen said. "Lay people are empowered to lead. Operating within the vision, the laity carries out the ministry of hospitality, youth and kids ministry, outreach and much more. Staff help guide, but laity do the work of the ministry."

Jodi Cataldo, new director of lay leadership development at the General Board of Discipleship, said more churches should embrace that view of laity's role.

As the church has evolved, she said, the model of clergy equipping laity to live out their faith has been replaced by one in which clergy emphasize preserving the institution and laity view clergy as keepers of that institution, rather than equippers and trainers

However, Cataldo said a shift is occurring.

"Clergy and laity alike are discovering that we need to return to our Wesleyan roots and the fundamental purpose of the church, which is to make disciples of Jesus Christ for the transformation of the world," she said. "This shift also has caused a change in the relationship between the clergy and laity and a rediscovery of what it means to â€˜be the churchâ€™ in the world today â€” a reclaiming of the partnership between clergy and laity to reach out beyond the walls in the name of Jesus Christ."

That partnership was the foundation of the early Methodist movement.

"In Wesley's Methodism, lay people were given opportunities for leadership that were unparalleled in the Church of England," said the Rev. Diane Lobody, professor of church history at Methodist Theological School in Ohio. "Methodism was a kind of school for leadership development” nurturing gifts, quick to identify people's strengths and talents and really adept at deploying people in service to the gospel."

That was also true for early American Methodism, Lobody added, although leadership opportunities "were more dramatically defined and constrained by race and gender."

Although authority, governance and legislative power resided in the hands of the clergy, Lobody said, records show Methodists took seriously their responsibility to share and grow in their faith, educate themselves about theological and social issues and help those in need. They led class meetings, served as stewards and trustees, directed orphanages and schools for poor children and preached to the masses.

"(American) Methodist churches began at the impetus of lay people who were already Methodist and had migrated to another part of the country," Lobody said. "As the Methodist Episcopal Church grew in the early 19th century, new ministries developed within the denomination, often led or energized by laity."

Laity must once again assume that level of leadership and commitment, Cataldo said, with clergy equipping and empowering them to do so. "The laity play a significant role ... (by becoming) transformational agents in their homes, in their local church, in their communities, in their annual or central conferences and throughout the world," she said. "In many ways, it is a grassroots movement that is bringing our Wesleyan heritage back to life in today's world."

Nadiera Young, 23, agrees. Young is an active member of Parkside United Methodist Church in Camden, N.J., and cofounder and member of the church's Devoted Dance Ministry. She also serves on the Ministries with Young People team for the Greater New Jersey Conference.

"Sometimes, in the local church, you see the same laity members doing everything," she said. "It's like once we, the church, find someone who is passionate and dedicated, we take them for all they have. We must do a better job including all laity."

Not doing so, she continued, excludes members whose lives may be changed through their service.

"We often seek a certain type of laity, and that excludes so many," she said. "We become so concerned with what people look like on the outside and how "together" they seem ... that we never give others the chance to grow."

Ken Watkins says people get the chance to lead and grow at Cornerstone.

The architect and owner of Architectural Concepts chairs the church's administrative council and is a trustee.

"I serve as a trustee because it is a way that I can use my God-given gifts and abilities to help oversee the use of the physical buildings and property that Cornerstone has been blessed with," he said.

"At Cornerstone, we love the fact they encourage everyone to serve in some manner," he said. "You are given the freedom to pick an area of service that you really enjoy and do that and to say "no" to other things."

Laity assume much of the responsibility for coordinating the church's programs and ministries, Watkins said, making decisions and completing tasks without first gaining approval from a committee or the pastors.

"We seek to place the right people in the right roles and allow them to use their skills and serve doing what they are passionate about," he said. "Because of that freedom, many people choose to take on other responsibilities and areas of service. Church becomes a joy, not a burden."

"The pastors trust those who have been put in charge of various programs, ministries and teams, and the laity trust our pastors to do what is best for Cornerstone," he said. "Cornerstone is our family, and we feel truly loved, valued and plugged in there."