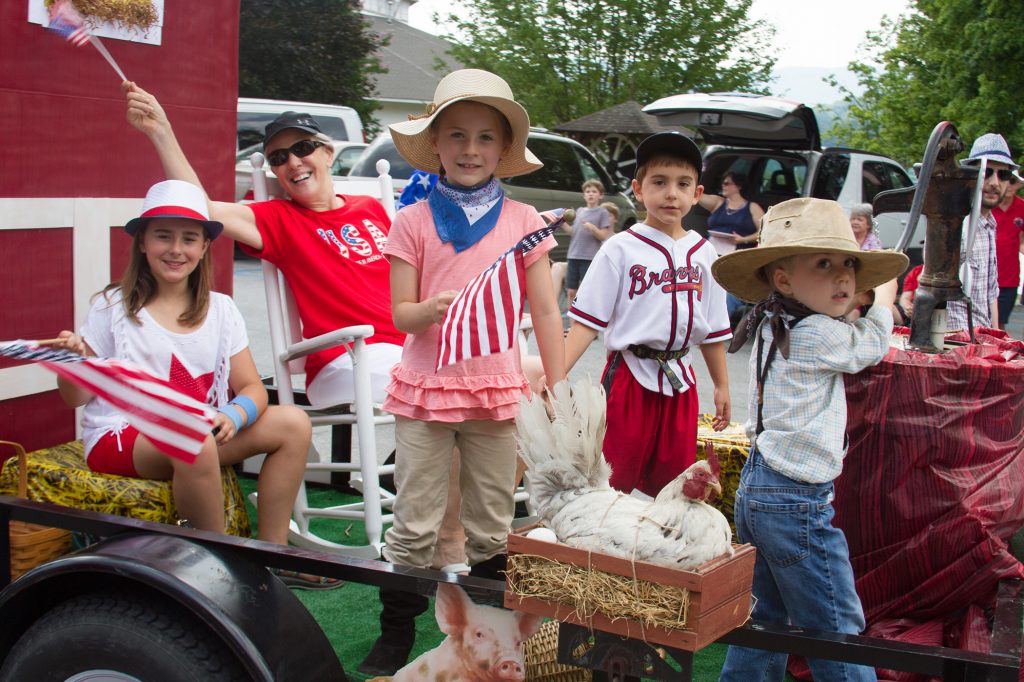 Lake Junaluska, N.C. – The Independence Day Celebrations at Lake Junaluska will feature three concerts, a variety of family-friendly activities and a fireworks display with more than 800 fireworks launched. Plus, don’t miss the all-new square dance that will take place on July 4 during the annual barbecue picnic. All are invited to spend a patriotic Fourth of July at Lake Junaluska. A concert by acclaimed bluegrass band Balsam Range kicks off the celebrations on July 2 in Stuart Auditorium. They will play a mixture of fan favorites from past albums, as well as new selections from their Mountain Voodoo album, which was released in November 2016. On July 3, a garden tour will take place from 9 a.m. – 1 p.m. with stops at five of Lake Junaluska’s gardens: the Biblical Garden, Corneille Bryan Native Garden, Rose Walk, Susanna Wesley Garden and Inspiration Point. There will be volunteers at each location to answer questions and provide information on each garden’s unique horticultural story. At 2 p.m. on July 3 a friendly competition will take place in the form of the Family Olympics. A series of fun and sometimes silly challenges will have families working together for ribbons and glory. The Family Olympics will take place in the field by the Nanci Weldon Memorial Gym. On the evening of July 3, Laura Story will perform in Stuart Auditorium. Story is a well-known contemporary Christian artist who has been recognized for her amazing musical ability and knack for getting to the heart of difficult issues. Her song "Blessings" won a GRAMMY award, a Billboard Music Award and three Dove Awards. Her fifth studio album, "Open Hands", was released in March of 2017. On the Fourth of July, festivities begin with a community Independence Day Parade. The parade theme is “This Land is Our Land: Celebrating Our National Parks.” Anyone is invited to participate or watch the parade. The parade begins at Lambuth Inn at 11 a.m. and proceeds along North Lakeshore Drive until its conclusion at the Nanci Weldon Memorial Gym. Immediately following the parade, a barbecue picnic will take place with bounce houses, face painting and a balloon artist for the kids, while adults will enjoy a performance by Whitewater Bluegrass Company. At 1:30 p.m., Whitewater Bluegrass Company’s front man, “Uncle” Ted White, will switch gears to serve as caller for a mountain square dance. No experience is needed to join the free dancing. The Lake Junaluska Singers will return to the Stuart Auditorium stage on the evening of July 4, when they perform a patriotic salute in their first concert performance of the season. After the concert, the Lake Junaluska Singers will sing the national anthem as the fireworks begin around 9:30 p.m. There will be more than 800 fireworks launched for the community to enjoy. The Balsam Range, Laura Story and Lake Junaluska Singers concerts take place at 7:30 p.m on July 2, 3 and 4. Tickets are $23 reserved or $18 general admission. As a special promotion, for general admission you can buy a ticket to Balsam Range and Laura Story and receive a free ticket for the Lake Junaluska Singers Lodging and meal packages for the entire event are available. To learn more about the Independence Day Celebrations or to purchase tickets, visit www.lakejunaluska.com/july4th. Lake Junaluska is a place of Christian hospitality where lives are transformed through renewal of soul, mind and body. For more information about Lake Junaluska programs and events, visit www.lakejunaluska.com. The Independence Day Celebrations are sponsored in part by the Haywood County TDA, Haywood Regional Medical Center, Smoky Mountain News, Sheppard Insurance Group, Wells Fargo, The Mountaineer, and RCF Construction Company.   INDEPENDENCE DAY CELEBRATIONS SCHEDULE Sunday, July 2 7:30 p.m. – Balsam Range in concert Monday, July 3 9 a.m. – 12 p.m. – Garden Tour. Various locations. Free 2 p.m. – Family Olympics. Field near Nanci Weldon Gym. Free 7:30 p.m. – Laura Story in concert Tuesday, July 4 11 a.m. – Independence Day Parade. Starts at Lambuth Inn, proceeds along North Lakeshore Dr. Free. 12 p.m. – Independence Day BBQ Picnic. Nanci Weldon Gym. $9 adults, $5 kids 4-11, Free for ages 3 and under. 1:30 p.m. – Square Dance. Nanci Weldon Gym. Free 7:30 p.m. – Lake Junaluska Singers in concert 9:30 p.m. – Fireworks display. Free