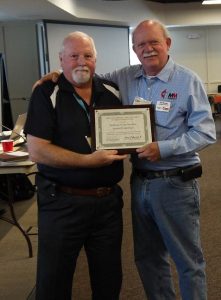 Neil Brown (R) accepts the top unit award from Dan Ramsey (L) on March 3rd[/caption] The United Methodist Men of Western North Carolina were honored March 3 as the top conference unit of United Methodist Men in the United States. The award is sponsored by the General Commission on United Methodist Men and the National Association of Conference Presidents (NACP) of United Methodist Men. Dan Ramsey, former NACP president, served as chair of the Judges Panel, and he and Mississippi Area Bishop James Swanson, president of the commission, presented the award at their meeting in Nashville. In addition, five local churches were honored for their accomplishments. Dan Ramsey offered these comments prior to presenting the award to Neil Brown, president of the Western North Carolina Conference UNited Methodist Men. "Every year, the winning conference sponsors a conference-wide event and, in 2016, they changed from a two-day rally to a one-day event. Attendance jumped by 75 percent. Meeting monthly by conference calls, the executive committee maintains an e-mail database of 1,050 people and contacts them frequently.  They designated September 11, 2016, as 'First Responder Recognition Sunday,' and many churches across the conference participated. They also designated July 17 as 'United Methodist Night at the Ballpark' held at a semi-professional baseball stadium." In other activities the men: