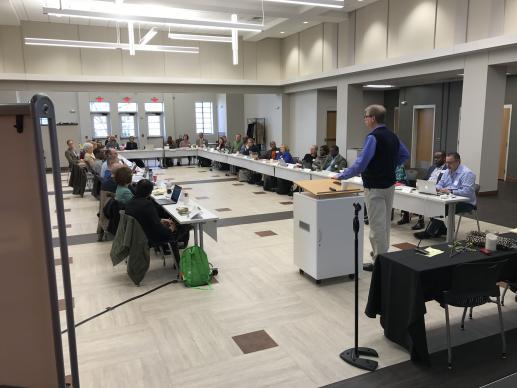 Bishop Ken Carter, one of the Commission's moderators, leads a group discussion..[/caption] Atlanta, Ga.: Meeting in Atlanta, Georgia this week, the Commission on a Way Forward continued to make progress towards completing the groundwork for their task, building relationships, engaging in learning, information gathering, working and worshiping together. On Wednesday, the Rev. Donna Pritchard led a morning Bible study of Galatians 2. Later, Commission members joined the staff of the General Board of Global Ministries in the stained-glass sanctuary of Grace United Methodist Church for an Ash Wednesday service. The day concluded with Bishop David Yemba reminding the Commission that people across the Connection are praying for the Commission. He shared a meditation about Ephesians 1:15-23, noting that Paul is sharing through prayer the things believers have in common, not only what is dividing them. “Above all is that you have the Lord Jesus Christ in common and then you have in common faith in him and you have common hope in him and you have God's promises in him,” said Bishop Yemba. Team reports In January, the Commission formed learning teams to take on various aspects of their work and the teams have been diligently pursuing their assignments. The work of some teams will take longer than others, but the following generally summarizes work to date.

• Initial research has involved interviewing bishops, pastors and laypersons from other denominations and gathering data and resources to report to the Commission. Denominations are unique in terms of polity and experience, and none is a perfect match with The United Methodist Church. • One team shared information with the group about the power of language and culture, sexual orientation and gender identity. Conversations have taken place with reconciling congregations and research gathered on experiences and perspectives from Africa. • There is ongoing research seeking clarification about the rules, petitions, logistics, and the roles of the Council of Bishops and the Commission on the General Conference. • One team led a learning session describing the current landscape and the different strategies at work of the Confessing Movement and other renewal groups, Reconciling Ministries and progressive strategies, the Wesleyan Covenant Association, and groups in the Central Conferences with general discussion and questions. • There was a report on a plan for gathering information within the Central Conferences related to the diversity of attitudes regarding LGBTQ issues and the different social, cultural and religious contexts. There was a strong recommendation to explore the subject of unity with the Central Conferences.

A tale of two centuries Dr. Russ Richey of Candler School of Theology says the unity and disunity of the church has been, in a sense, his life’s work. He shared insights about how Methodism has historically dealt with disagreement and the different ways the church dealt with conflict over two centuries. The 19th century saw separation and organizational division among American Methodists every decade. The century following brought unity, even amidst divisions that were more internal than structural. “By and large we stayed united, but there were serious divisions and controversies.” Richey said there was “separation between” in the former and “separation within” in the latter. The earliest disputes were over a variety of causes, sometimes over big issues such as slavery. “We were a very popular movement. In some ways for the 19th century, we were the most popular and dynamic movement, so the big issues the country wrestled with were ones we as Methodists took on.” The result was division, and those divisions had costs, he says. “We didn’t speak with a common voice, but churches competed with one another and reached out and evangelized.” “Beginning in the very late 19th century and continuing in the 20th, there was a sense that these denominational divisions tore apart the cloak of Christ, that we were dividing Christ’s gift to us,” he said. “There was really a Biblical mandate and Christ’s injunction to bring us together and so a lot of energy was put into unitive efforts,” said Dr. Richey in an interview. Following the presentation was a discussion about takeaways that might be important to the Commission’s process and what other historic perspectives or information might be needed, including learning more about our history globally. Gathering additional input The Commission also continued discussion both in small groups and as a body regarding the input they need from other groups and individuals, including:

The group worked together on beginning to compile a comprehensive list. The Commission began its last day with a Bible study on Galatians 3 led by the Rev. Helen Cunanan of the Philippines. There was also a discussion of a timeline for their work ahead. The Commission's next meeting will be April 6-8 in Washington, DC. More information on the Commission is available on their website at UMC.org/wayforward. About the Commission on a Way Forward The 32-member Commission on a Way Forward was appointed by the Council of Bishops to assist the bishops in their charge from the 2016 General Conference to lead the church forward amid the present impasse related to human sexuality and resulting questions about the unity of the church.