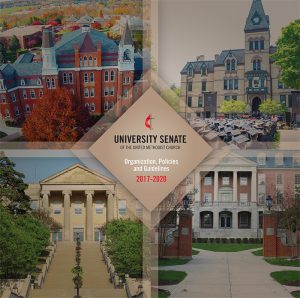 The University Senate convened in late January for the first of its two annual meetings. The meeting marked the first for 13 new senators who were elected to the University Senate for the 2017-2020 quadrennium. The new senators include:
Greg Bergquist, associate general secretary of the Division of Ordained Ministry at the General Board of Higher Education and Ministry (GBHEM), and Glenn Kellum, special assistant in the Office of the General Secretary at the General Board of Global Ministries became ex officio members of the Senate.


The University Senate, established as the first accrediting agency in the U.S. in 1892, is an elected body of professionals in higher education created by the General Conference to determine which schools, colleges, universities and theological schools meet the criteria for being listed as institutions affiliated with The United Methodist Church. The University Senate also provides support for the development of educational institutions whose programs reflect significant educational, cultural, social and human issues in a manner reflecting the values held in common by the institutions and the church.


GBHEM serves as the administrator for the University Senate. In addition, GBHEM’s general secretary and associate general secretaries of the Divisions of Higher Education and Ordained Ministry serve as ex officio members of the senate.


“The work of the Senate is more important than ever in ensuring students have access to education programs based in Christian values and Methodist tradition,” said John Wells, associate general sectary of the Division of Higher Education at GBHEM. “For more than 125 years this body has been about the work of the church and the Wesleyan tradition of joining education and ministry.”


“The Senate works with the schools, alongside regional and state accreditors, to ensure excellence in United Methodist affiliated schools. They also work to ensure schools display the integrity and values of the church, along with providing well-structured programs for quality in Methodist education across the connection,” Wells added.


The Senate will reconvene in June 2017. To learn more about the University Senate and to view a listing of senators, visit www.gbhem.org.