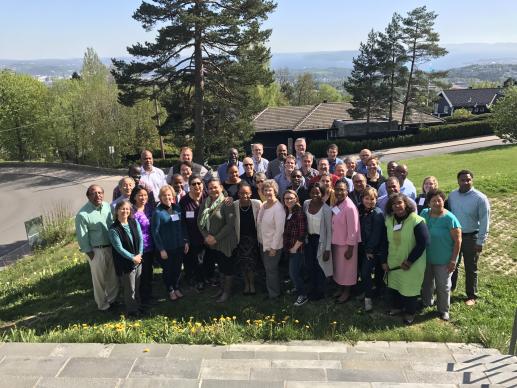 Oslo, Norway: Connectional Table members from around the world gathered in Oslo, Norway, May 17-21 for their second face-to-face meeting of the quadrennium, with a dual focus on the worldwide nature of the church and creating vital congregations through the Four Areas of Focus. The Oslo location in the Northern Europe and Eurasia Central Conference set the stage for one of the meeting’s stated objectives: to cultivate responsibility for the worldwide mission of the church by cultivating understanding of the group’s own role in stewarding the work. The Rev. Ole Birch, who represents the Northern Europe and Eurasia central conference, called it “a microcosm of The United Methodist Church,” which spans nine time zones and includes nine official languages and which encompasses the largest geographical area of any central conference. “Everything you find in global Methodism, you will find here,” he said. Preceding the meeting, members of the group had an opportunity to experience the national celebration of Norwegian Constitution Day, with a parade past the Royal Palace and a cultural program at the CentralKirken I Oslo United Methodist Church. Attendees learned about the work of the Norway Annual Conference, where The United Methodist Church is “small but vital.” Established in 1876, it includes 12,000 members and 47 congregations. Members enjoy participating in gospel weekends and other inspirational gatherings, and many congregations use culture to reach out to their communities. Most Norwegian congregations support a mission project. Daily worship services were designed to highlight the worldwide nature of the church as well. “We had scripture read in French, German and other languages; we included multiple voices from around the Connectional Table,” said the Rev. Kennetha Bigham-Tsai. “We tried to include a sense of the context of the ministry here in Oslo by including local people as musicians … at the remembrance of baptism, the water used came from the Oslo fjord, the stones came from the local environment, and the Communion wafers were specially baked at a bakery here.” The bulk of the meeting was spent in small and large group discussions focused on work group tasks, as well as creating shared values around relationships and strategies. Three advisory groups related to the worldwide nature of the church spent time in their groups working on their assigned tasks: the general church council advisory group, the U.S. structure advisory group, and the Chapter 5 revision advisory group. The Chapter 5 revision group is working with the Standing Committee on Central Conference Matters and the Committee on Faith and Order around revisions to the Global Book of Discipline. There were table discussions about creative visions for alternatives to the current administrative order and how to uphold the principles of subsidiarity and equity There are also three advisory groups related to the Areas of Focus that worked on specific tasks: agency evaluation, connectional assessment and missional trends. A process for agency evaluation was approved that provides an external review and evaluation of the agencies effectiveness in seeking to aid annual conferences through the Four Areas of Focus, fulfilling their disciplinary mandates and other essential ministries. The general secretaries for the four lead agencies made presentations outlining their plans and progress updates for each of the focus areas:.

United Methodist Communications presented a research-based, audience-focused messaging strategy to communicate about the Four Areas of Focus to members, leaders and seekers. The general secretaries have also prepared a comprehensive report detailing how the program agencies are working together through collaborative activities to create a positive impact in these strategic directions. In other business, the Connectional Table affirmed a proposal to create a Global Migration Sunday offering, observed on December 3, 2017. “What we are asking for is all United Methodist conferences around the world to prayerfully remember the plight of migrants around the globe on the first Sunday of Advent 2017 and to gather an offering dedicated to responding to human suffering caused by migration,” said Thomas Kemper, general secretary of Global Ministries. The United Methodist Committee on Relief and its partners are regularly working with refugees and the needs are rapidly growing. Upon recommendation of the Budget Advisory Team, the Connectional Table also approved requests for World Service Contingency Fund disbursements: About the Connectional Table The Connectional Table oversees the coordination of mission, ministries and resources across the denomination. Created at the 2004 General Conference, the Connectional Table was formed to serve as both the visioning body of the church and the steward of resources to carry out the vision of the denomination worldwide.