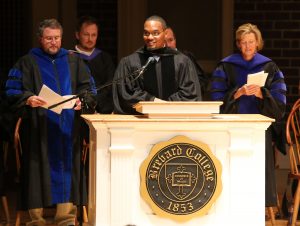 Brevard College’s recently appointed Campus Minister is headed to the United States Senate. Sharad Creasman will be the Guest Chaplain opening the Senate floor on Capitol Hill March 2. The prayer will be broadcast live and online on C-SPAN at 9 a.m. “I’m excited for the opportunity to serve our country in this unique role, to meet and speak with the Chaplain of the United States Senate, Barry C. Black, and North Carolina Sen. Thom Tillis, and to simply be present on that day,” Creasman said. Each year, the U.S. Senate appoints guest chaplains representing the world’s major faith traditions. The tradition traces its roots back to Benjamin Franklin and the Continental Congress of 1787. The Chaplain's Prayer is referred to as “one of the Senate’s most enduring traditions” in the official Senate pamphlet, “Traditions of the United States Senate.” Creasman said the opportunity came about through a conversation with Sen. Thom Tillis, the U.S. Senator from North Carolina. Creasman was recommended by Tillis' office and approved by the Office of the Chaplain of the United States Senate. “As Guest Chaplain for the United States Senate, I hope to offer prayer for the Senate, its leaders and staff, and the constituencies they represent that conveys a spirit of selflessness, service, benevolence, and courage,” Creasman said. BC welcomed alumnus Creasman as its full-time Campus Minister July 1, 2016. Prior to Brevard, he was pastor at Columbia Drive United Methodist Church in Atlanta, Georgia. The College spent two years partnering with churches to raise funds for the position, which had not been filled for five years. Creasman, a native of Brevard, holds a Bachelor of Arts in Religious Studies from Brevard College as well as a Master of Divinity with a concentration in Ethics from the Morehouse School of Religion at the Interdenominational Theological Center in Atlanta. At Morehouse, he was inducted into the International Society of Theta Phi, an honors society in theological education. Creasman also holds a Master of Theology from Emory University’s Candler School of Theology. He is a Chaplain in the U.S. Air Force Reserves. Brevard College is committed to an experiential liberal arts education that encourages personal growth and inspires artistic, intellectual, and social action. Learn more at brevard.edu.