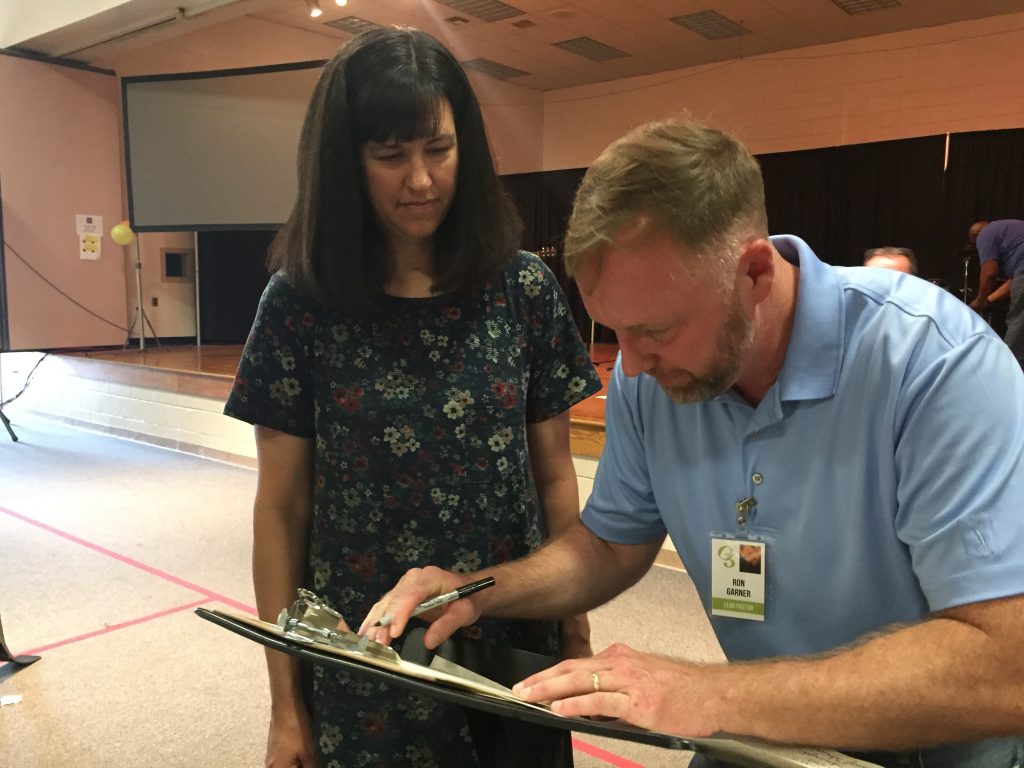 Ron Garner and his wife signing the charter document[/caption] A new United Methodist church was launched in Winston-Salem this month. According to Mark Key, pastor at Mt. Tabor UMC, “May 21st was a great day at Meadowlark Elementary School.  G3 United Methodist Church was chartered with 129 persons in attendance, and 79 persons from 44 different families presented themselves for membership.” The G3 faith community began as an alternate worship service in 2011 from Mt. Tabor UMC.  The concept is to reach unchurched people and people that had dropped out of church or weren’t likely to attend a traditional church.  Their mission statement is: “To help people who feel far from God come home.” During the last seven years, G3 has developed a small group ministry called Growth groups, a children’s ministry, outreach and leadership teams, and a youth ministry.  The faith community became financially independent about 4 years ago.  The average attendance of the G3 faith community is around 125. The history of this new church dates back to 2010 when someone from the Conference Staff came and met with the pastors and leaders at Mt. Tabor and challenged them to think about doing a new worship service off site. Dr. Earl Wilson was the senior pastor at that time.  Ron Garner was the associate pastor.  Garner began to take a lead role in recruiting persons to be a part of this new worship service at Meadowlark Elementary School, which is about four miles southwest of Mt. Tabor. Key thinks that this kind of mother/daughter church is the best way to start new churches. He says that most denominations have stopped using the “parachute” method of starting new churches from scratch. According to Key, “Many churches such as “The Summit Church” in Durham have started churches all over the country using this method.  They have ten or fifteen right in the Raleigh/Durham/Chapel Hill/Cary area alone.  The parachute method is very expensive and most denominations are doing very little that way now.” He continued, “The mother/daughter method has many advantages: the easy access to a core group of people who share the vision and hear God’s call, a successful DNA of knowing to do church well and whatever financial resources the mother church is able to share, like salary support and some other start-up financial support. Charter membership will be open until July 1 and more families that weren’t able to be present for the constituting service are expected to join the new church as well. A nominating team was elected as well according to the rules of the Book of Discipline.  A charge conference will take place in June to finish electing the rest of the leadership teams. Susan Jones, one of the founding members and on the leadership team said, "The entire chartering service was an amazing moment particularly when all the people came forward to join…standing back and seeing all that God had done over these past several years."