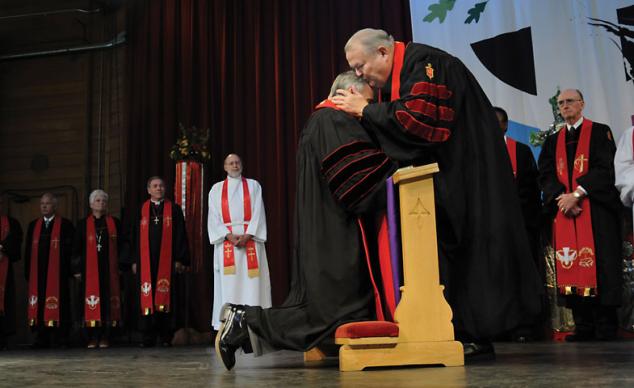 Retired Bishop Marion Edwards kisses newly elected Bishop Paul Leeland during the Southeastern Jurisdictional Conference's service of consecration in 2008. The five U.S. jurisdictions will elect 15 new bishops and assigned its new and continuing bishops July 13-16, 2016.[/caption] by Heather Hahn (UMNS) While the U.S. political scene focuses on who is winning red and blue states, many United Methodists are preparing to vote on who will wear the purple. Starting July 13, the five U.S. jurisdictional conferences will elect a total of 15 bishops. The gatherings also will finalize the next assignments for a number of already active episcopal leaders. In addition, two of the meetings will take up proposals on consolidating conference boundaries. Central conferences — United Methodist regions in Africa, Europe and the Philippines — have elections scheduled later in 2016 and in early 2017. So far, at least 55 clergy in the United States have announced their candidacy for bishop. In some jurisdictions, delegates also can nominate candidates from the floor. The United Methodists who vote on bishops include General Conference delegates and other church leaders. Each conference elects twice as many delegates to jurisdictional conferences as they do to the denomination’s top lawmaking body. That means a total of 1,008 delegates will vote in this month’s U.S. bishop elections. The delegates include an equal number of laity and clergy. All newly elected U.S. bishops will take office Sept. 1. What bishops do United Methodist bishops do not wear miters or special robes. Their main distinctive garment is a simple purple clergy shirt. While limited in fashion choices, bishops do wear multiple hats, metaphorically speaking. Bishops are elders “set apart for a ministry of servant leadership, general oversight and supervision,” states the Book of Discipline, the denomination’s governing document. United Methodist bishops appoint clergy. They also are the first stop when clergy face complaints under church law. They oversee general church agencies as board members and sometimes agency presidents. They represent the denomination in ecumenical and interfaith relationships. They also frequently represent the church in the wider community and before state and national governments. Impact on sexuality commission This new class of bishops, at least in the near future, will have an additional task. General Conference 2016 in May gave the Council of Bishops authority to name a special commission that will review and possibly recommend revisions to church teachings related to human sexuality. The lawmaking assembly also voted to hit the pause button on the sexuality debate during the gathering. The bishops are considering calling a special General Conference in 2018 or 2019 to take up the commission’s work. The hope is to keep a deeply divided denomination united. The Book of Discipline, since 1972, has stated that all people are of sacred worth, but the church considers the practice of homosexuality “incompatible with Christian teaching.” The church bans pastors from officiating at same-gender weddings and bans the ordination of “self-avowed practicing” gay clergy. However, debate has intensified in recent years, and in the month since General Conference, a number of U.S. conferences have declared that they will not conform to these bans. Three of the U.S. bishop candidates are openly gay. At this point, the Council of Bishops has tasked its 17-member executive committee with developing a process to appoint the human-sexuality commission and creating a timeline for the commission’s work. The executive committee is scheduled next to meet the week after jurisdictional conferences. Newly elected bishops eventually will also have a say in what happens with the bishops’ proposed“Way Forward.” “This new class of bishops will bring important perspective and experience to the council's work related to implementing the proposal,” said Dakotas-Minnesota Area Bishop Bruce Ough, the Council of Bishops president. Hahn is a multimedia news reporter for United Methodist News Service. Contact her at (615) 742-5470 or newsdesk@umcom.org. Read the entire article at UMNS which includes: links to profiles of all the episcopal candidates, details of the jurisdictional gatherings, and a list of all retiring bishops. Keep up with the news from SEJ 2016 at: http://wnccumc.org/sej-2016/