Conference in Partnership with Fresh Expressions US 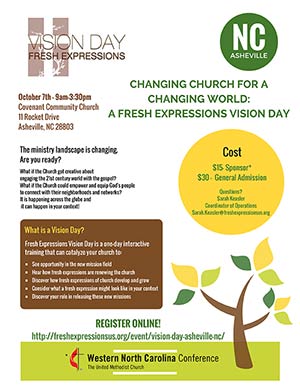 Click to download large flyer[/caption] The Fresh Expressions US Team is pleased to announce a new partnership agreement with the Western North Carolina Annual Conference of The United Methodist Church. This is the latest step forward in a growing collaborative cross-denominational movement. John Boggs, former Director of Vital Discipleship in the Western North Carolina Conference said:

In a time when more and more people are not thinking about coming to church, we in the WNC Conference are thinking about taking the church to them!  By partnering with Fresh Expressions US, the leaders, authors and trainers are stimulating our missional imagination that church can happen anywhere and among people who may not be attracted to our institutional settings.  This exciting missional church movement is helping us share the Gospel of Jesus Christ in creative ways as we become neighbors in the micro cultures of society.

As Western North Carolina’s Fresh Expressions movement grows, Luke Edwards has accepted the role of coordinator for the movement.  Luke, the 2016 Denman award winner for evangelism, planted a network of fresh expressions of church alongside Boone United Methodist.  King Street Church is reaching out to the unchurched people in and around downtown Boone, but retains a strong connection to Boone UMC.  Luke has been involved in the broader US movement through leading Vision Days and other trainings for Fresh Expressions US.  Luke will remain as the pastor of King Street Church in addition to his new coordinating role. Luke Edwards said, “I am excited to see the fresh expressions movement grow in our conference and am honored to be a part of cultivating our missional imagination and creativity as a conference. The theology and resources of fresh expressions have been invaluable for King Street Church and I am confident other churches in our conference will find value in this model of forming church in the contexts of our communities.” To discover of the value of this new movement in the region, join us for a Vision Day on October 7 at Covenant Community UMC in Asheville, NC. Fresh Expressions is an international movement of missionary disciples cultivating new kinds of church alongside existing congregations to more effectively engage our growing post-Christian society. Begun in 2004 as an initiative of the Church of England and the British Methodist Church, it has resulted in the birth of thousands of new communities in the UK bringing renewal to established churches. Fresh Expressions has spread to Australia, Canada, New Zealand, South Africa and Germany. In 2010, the movement began taking shape in the US through the vision and generosity of the Baptist General Association of Virginia and a growing number of partners committed to a new era of mission in North America.