Commentary- All I wanted was a pack of bologna

by Kathy Odell All I wanted was a pack of bologna . . . It has been a busy week at Annual Conference.  I usually come alone, but this year my husband and two of the grandchildren were able to join me.  Between helping with registration, and serving as a district delegate, having time to eat lunch with my family was going to be a special treat.  They picked me up after the morning session, and we headed back to where we were staying for a quick picnic lunch – but not before stopping at a local grocery chain for a pack of bologna (chips, plates, cookies – I should have gotten a buggy!). A conversation we had with the owner of our bed and breakfast had stuck with me from the morning.   He was from a multi-cultural neighborhood in Miami, and moving here had been difficult for his 5 year old daughter.  She didn’t understand when she approached children of other races or ethnic backgrounds here in Waynesville why they were surprised she wanted to play with them, and the sometimes the reactions from the adults were even worse.   I hadn’t witnessed this type of prejudice in a long time personally, and I guess I didn’t want to believe that it really existed. At least not in North Carolina, and certainly not in the beautiful, serene hills of the Smoky Mountains. 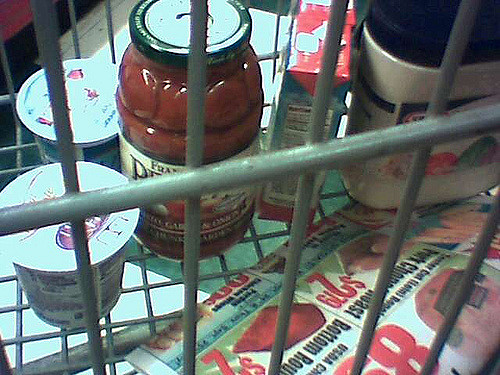 As I was standing in line waiting to pay for my groceries, there was a mother in front of me with 3 children, one about a year old in the buggy, and maybe a 3 and 5 year old.   I’ve been there-it’s lunch time, cranky kids, and all you want to do is get out of the grocery store in one piece.   As we waited, it was apparent the elderly lady we were behind was struggling.  Her buggy was in the wrong place, the cashier couldn’t reach her groceries to check them out.  We all had to back up to reposition her cart.  She couldn’t find the reward card she knew she had, then her EBT card only had $16, so she had to write a check for the rest – and her eyesight was not good, so she needed help to swipe her card again, and the cashier filled in her check after she signed it. All this waiting didn’t help with kids who were restless, but this kind lady with these three children insisted I go ahead since I only had a few items and she had a full buggy.  I protested, but she pushed me forward and I thanked her – while admiring her beautiful children.   While I was being checked out, an elderly gentleman was sitting by the office in a rolling chair.  He rolled it back to the lady behind me and asked in a loud voice “Do you speak English?” – Oh yeah, I didn’t mention she was Hispanic – because I hadn’t really noticed.  She responded that she did, and he became even louder “you need to keep your kids from running around the front of this store, your son right there is going to turn that rack over, and I know you don’t have the money to pay for it, and if you are going to bring them shopping, they need to learn this is a business, and not a playground . . . “   There was more, but in the shock of the moment I can’t really remember what else he said.  The entire front line of registers, with lines of customers became silent.  I was in shock, speechless.  Thankfully the cashier was able to speak, and said to the gentleman that it was O.K., the children weren’t hurting anything.   He continue to protest, and she asked him to please be quiet, and he reluctantly retreated back to where he came from, against the wall of the front office. I am so ashamed.  Ashamed that I still forget this kind of prejudice exists, even in my neighborhood.  Ashamed that we still judge people for the splinter in their eye, while ignoring the log in our own.  Ashamed that I didn’t speak up, and that the cashier had to step in, when I was right there. All I wanted was a pack of bologna . . . Kathy Odell is the Director of Human Resources for the Western North Carolina Conference