Commission on a Way Forward meets in Chicago 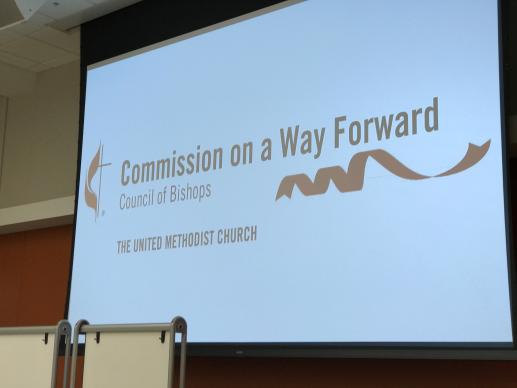 Chicago, Ill.: The Commission on a Way Forward held its fourth meeting on July 19-21 at the Wespath building in Chicago, Illinois. The Commission has been assigned by the Council of Bishops, in response to the action of the 2016 General Conference, to help the denomination to explore new ways of embodying unity that will move the church beyond its impasse around ministry and human sexuality. Moderators Bishop David Yemba, Bishop Sandra Steiner Ball and Bishop Ken Carter led the 32-person global commission in its work. This was a hopeful and productive meeting. The Commission is at the stage of sketching plans rather than painting a complete picture and is still not yet at the midpoint of our meeting schedule. The Commission continues to build trust among commission members. The Commission spent a great deal of time working on a common core of practices related to being followers of Jesus in The United Methodist Church. A prominent image of this is Jesus as the vine in John 15, and his disciples as the branches. From this core, the Commission is moving more deeply into the areas of conceptual models and implications for polity. In the coming days, the Commission will release a significant Status Report. The Commission is grateful for the prayers of many across the world. The meeting began with a time of centering and devotion based on the biblical image of the vine and branches led by Bishop Debra Wallace-Padgett. Following the devotional time, Bishop Bruce Ough, president of the Council of Bishops, met with the Commission. Bishop Ough, based on Tod Bolsinger’s book Canoeing the Mountains, reflected on the journey of Lewis and Clark in finding a passageway through the North American west to the Pacific Ocean as a metaphor for the challenges of The United Methodist Church in the uncharted territory of the present. He described a core mission, a core proclamation of the gospel (“Jesus is Lord”) that allows for different missional expressions. In addition, he noted other bodies within the denomination that are working concurrently on related matters: the Standing Committee on Central Conferences, the Connectional Table, the Committee on Faith and Order and the General Board of Church and Society. Progress reports were shared from the Listening Team, the Central Conference Team, and the Polity and Strategy Team. The information shared through these reports represented outreach to and feedback from a number of constituent bodies in the denomination, including youth, young adults, seminarians, advocacy and renewal groups, districts and annual conferences, general secretaries of boards and agencies, the Council of Bishops, and pastors of larger congregations. A team working on draft models related to “new ways of embodying unity” (Mission, Vision and Scope document) gave its report. This report included and was grounded in John 15, recognizing Jesus as the common vine and differing expressions of United Methodism as potential branches. The work at this stage is tentative and exploratory. Bishop Christian Alsted and Dr. Amy Valdez Barker brought greetings on behalf of the Connectional Table, and General Secretary Barbara Boigegrain led a conversation on the implications of structural changes related to a way forward for the work of Wespath and the pension plans of the church. In addition, Bishop Debra Wallace-Padgett, Alfiado Zunguza and Matt Berryman led devotions each day based on John 15. David Field of Switzerland gave a summary of the theological learnings on unity from the Colloquy on Unity and Human Sexuality, and Dave Nuckols of the Minnesota Conference interpreted the data on LGBTQ identity and understandings. For more information on the Commission on a Way Forward, visit umc.org/wayforward. About the Commission on a Way Forward The 32-member Commission on a Way Forward was appointed by the Council of Bishops to assist the bishops in their charge from the 2016 General Conference to lead the church forward amid the present impasse related to human sexuality and resulting questions about the unity of the church.