Hannah, a 14 year old from Indiana, reminded the entire General Conference on Friday of the power of Jesus Christ. During the report of The Connectional Table Hannah told her story of raising money for clean drinking water for people around the world. She told the story of Jesus feeding the 5,000 as recorded in John. She said that the real miracle was Jesus showing the disciples that He was still in charge. She said that to the disciples, "The solution seemed so far away, they forgot who they were with." 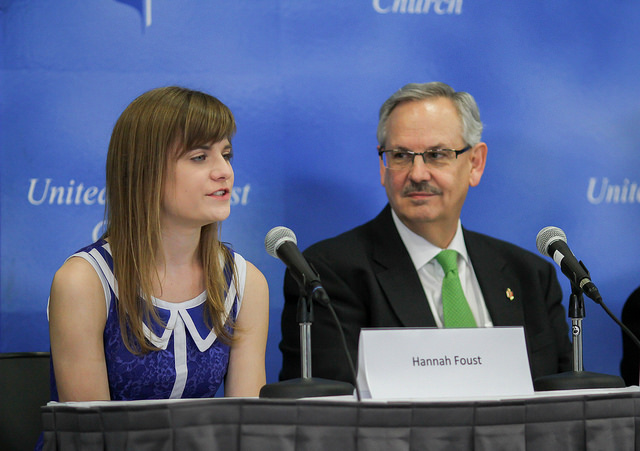 Hannah Foust speaks at a May 13 press conference at the United Methodist 2016 General Conference in Portland, Ore. Bishop Bruce R. Ough is to her right. During the morning plenary session, Foust shared her passion for provding safe accessible water to communities in Africa. Photo by Maile Bradfield, UMNS.[/caption]

1 Samuel 17:39-40 "I can't walk in this," David told Saul, "because I've never tried it before." He then grabbed his staff and chose five smooth stones from the stream bed. He put them in the pocket of his shepherd's bag and with sling in hand went out to the Philistine." David had confidence because he knew who was with him! In verse 45, David says to Goliath, "I come against you in the name of the Lord of heavenly forces..."

Before I left for General Conference the people I serve in ministry with said things to me like, "Don't embarrass us!" (They know me well!). One friend handed me a small rock  and said, "Remember what Jesus told Peter... Just remember to keep it about Jesus out there." Another friend gave me a devotional scapular (pictured above) to wear as a reminder - when it gets scratchy on my front and back - that Jesus is with me... and us! Basic stuff. But how badly I need to remember that truth! Together, the scapular and rock remind me of David's sling and rock used to conquer Goliath. Just using what he had with him instead of trying to fit into something that wasn't him, David overcame the mess of the moment.

People are messy, and General Conference reminds us of that. God is GREAT and General Conference reminds us of that as well! Mrs. Rousseau, Mike Jordan, Nancy Campbell, Bud Casteel, Gary Moran, Horace Maness, David Joyce, Jay Pendleton, Buzz Scott, Ned Owens, Sherry Washam, Jerry Evans, countless family members, colleagues in ministry --- all wonderfully messy people who helped shape me to never forget that Jesus is with me. Now I add Hannah to the list. I need the Church, full of wonderfully messy people, to remind me that Jesus is with me. And all of us.

Praise be to God! Even when the solution seems far away - and half way through General Conference it can feel that way - we must never forget who we are with! In the midst of amendments and disagreements and messy stuff - we are with a miracle working Savior! Jesus is still at work!

David Christy is a clergy delegate from Gastonia, North Carolina