Paul warned them, 10 “Men, I see that our voyage will suffer damage and great loss, not only for the cargo and ship but also for our lives.” 11 But the centurion was persuaded more by the ship’s pilot and captain than by Paul’s advice.12 Since the harbor was unsuitable for spending the winter, the majority supported a plan to put out to sea from there. They thought they might reach Phoenix in Crete and spend the winter in its harbor, which faced southwest and northwest.

41 But they struck a sandbar and the ship ran aground. The bow was stuck and wouldn’t move, and the stern was broken into pieces by the force of the waves. Acts 27:10-12, 41 (CEB)

As the voting results regarding “Rule 44” were displayed, my heart sank.  The General Conference had voted down the possibility of addressing particular subjects “through a group discernment process leading to a plenary decision.”  After two mornings of debate, which is an extraordinary amount of time considering the volume of work we must cover, we’d chosen to continue to set the course of the church through voting, guided by “Robert’s Rules of Order.”

On one hand, it made sense.  Pulling together 864 delegates from across the world and expecting them to trust each other is a bit of stretch.  Yet on the other hand, how would we ever build that trust if we didn’t allow ourselves to be placed in situations where we might talk with one another, seeking to hear each other’s point of view in the hope that in the midst of the conversation, the voice, the direction of God might become clearer to us all.

In the New Testament, the only recorded majority vote, found in the 27th chapter of Acts, ended in a shipwreck.  Paul, a prisoner on the ship, sought to warn the centurion guarding him of impending danger if they continued on their voyage.  The ship’s pilot and captain felt differently, and when they put the matter to a vote, the majority supported moving on to Phoenix in Crete.  In doing so, they were buffeted about in a storm, running aground in Malta.

It was a fitting image for how I felt as I saw the bar graph showing 355 “yes” and 477 “no” flash on the screen.  In my opinion, we’d ignored the wisdom of those who were calling us to risk following a different path.  Hearing claims of “we’re not ready,” I wondered about the familiarity and “safety” of just remaining stuck.   I questioned whether I’d return to Charlotte from Portland with the news, nothing much changed. 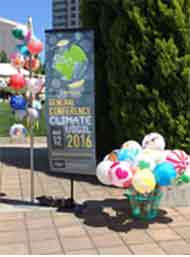 Thankfully, there’s something deep in my soul that will not allow myself to languish in that kind of defeat for long.  I resonated with Bishop Palmer when he proclaimed as a part of the Episcopal Address, “I refuse to live into discouragement and despair.”  While the “body” may have defeated a “process” for group discernment, they didn’t have the power to keep me from taking the initiative to seek out others for conversation, for prayer, for discernment.  While our vote to “keep doing it the way we’ve always done it” may have, for a time, ensured that we stayed stuck in the muck and mire of maintaining the institution, I believe that where two or three are gathered, the Spirit’s presence among us can break us free for new and exciting opportunities for ministry in this world.

As is so often the case, I get caught up in thinking that we can and should legislate faithfulness.  Not so!  It’s about acting faithfully and trusting God with the outcome.

In the days to come, I’m committed to learn from my sister from East Congo what it takes to grow a church from 12 to 78 in a year.  I want to talk with my brother from the Mozambique and learn how they train lay speakers there.  I will take time to learn about intentional communities in Florida in which young adults seek to discern where God is calling them to serve, and I’ll investigate specific ways that the church can lead the way in taking care of the fragile earth on which we live.

I continue to have hope for our work here in Portland.  We covet your prayers, that we might be open the Spirit’s guidance in setting the next course for this missionary journey we call The United Methodist Church.

Rev. Amy Coles is the assistant to the bishop for the Western North Carolina Conference, and a clergy delegate to General Conference.