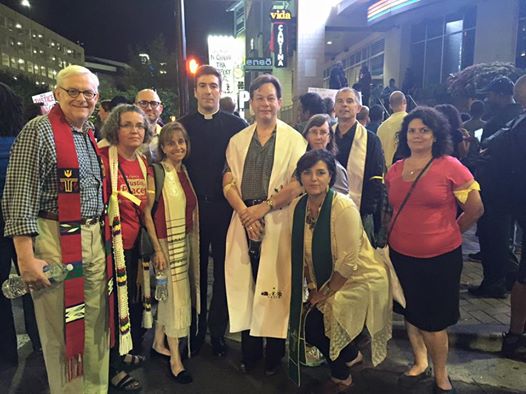 Rev. Amelia Stinson-Wesley (3rd from right) with an ecumenical group of clergy were involved in peaceful protest last week in Charlotte[/caption] Following social media over the past week, there have been a number of significant reflections and stories from pastors and activists concerning the protests in Charlotte after the shooting of Keith Lamont Scott on September 20th. This post by Rev. Dr. James Howell of Myers Park UMC in Charlotte was picked up by the United Methodist News Service:

Chaos in Charlotte & the Casualty of Truth

It was on the third day of the chaos in Charlotte that I realized that what had gone up in flames on our streets was truth, or several truths actually.  Standing behind Rev. William Barber at a press conference as he asked for transparency from the police, and for all of us to look squarely in the face of governmental policies and personal attitudes that are blatantly adverse to the African-American community, I got stuck on his words which were first Jesus’ words: “You shall know the truth, and the truth shall set you free.”  I wonder if, in order for us to get anywhere with race or justice or anything that matters, we have to dig our way out of the crusty cynicism that has given up on the idea of truth.  No matter how flawed the press or politicians or religious leaders or even we ourselves might be, there is still such a thing as reality.  God not only wants us to know what's true, but has mercifully given us the ability to figure out what happened.  When we do, we’ll begin to walk toward freedom... Read the entire post

This piece appeared in the Morganton News Herald.  It was written by Rev. Jonathan Coppedge-Henley, who is a general evangelist and associate at Huntersville UMC: Prayers for healing hearts, a city It was kind of surreal in uptown Charlotte on Thursday evening. The streets were not jammed with traffic leaving work. The rhythmic hum of helicopters was persistent overhead. Yet, when I stepped out of my car at Little Rock AME Zion Church, the cool breeze coupled with the dappled sunlight through the trees made me feel almost serene, despite the fears of friends (and my mother-in-law) that I was still uptown after the rioting the previous two nights. It was, as the United Methodist Communion liturgy says, “a good and right and joyful thing” for me to be there. More than 75 clergy gathered at Little Rock to prepare to walk uptown together to the spot where Justin Carr was shot to death Wednesday night. The purpose was to re-consecrate that site with prayers, presence, songs and even some tears. I eventually ran into two clergy I knew, but at first I didn’t know anyone I saw... Read the entire article This was posted on September 26th by the Charlotte-Mecklenburg Opportunity Task Force.  Those signing included a number of UNited Methodist pastors and lay leaders: A Statement of Commitment

We commit ourselves to the continuous work of building and being a community of justice, equity, fairness, and opportunity for all.

As individuals, companies, organizations and congregations that care about Charlotte, we add our signature as our commitment to the long term solution of these questions and challenges and invite others to join us in this evolving and ongoing effort... Read the entire commitment letter and review signees